Georgia’s premier Land Report Certified Community is the ultimate Blue Ridge Mountains getaway. There are countless reasons people love Atlanta. The home of CNN, Gone With the Wind, the Braves, the Falcons, and the Hawks, this sophisticated metropolis hosted the… 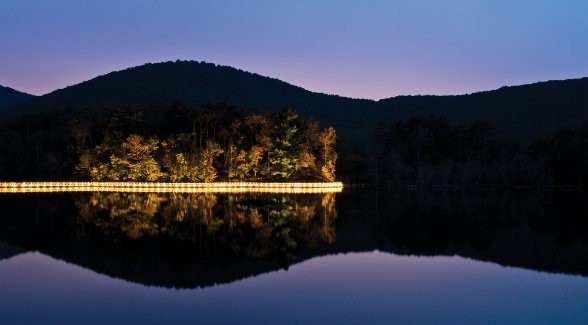 Nestled at more than 2,500 feet above sea level, Falling Waters offers unmatched privacy yet sits just
an hour outside of Atlanta in North Georgia’s gold country.

There are countless reasons people love Atlanta. The home of CNN, Gone With the Wind, the Braves, the Falcons, and the Hawks, this sophisticated metropolis hosted the 1996 Summer Olympics. More recently, the city’s blend of fine dining and local fare have made Atlanta a destination for foodies of all stripes. However, that’s not all this city is known for.

Thanks to its heat and humidity, Georgia’s capital also bears the nickname “Hotlanta.” And on almost any given summer day, these two attributes that can turn a foray outdoors into a sweat-drenched episode of Survivor.

There’s an easy way to beat the heat, and it’s not round-the-clock air conditioning. Generations of Georgians (and, for that matter, Floridians) have long known about an oasis, one that sits just a short drive north of metro Atlanta.

Called the Blue Ridge Mountains, this high-country sanctuary is home to thousands of acres of wooded hills and streams.

State parks, national forests, and wilderness areas abound. So do a few pockets of private land. And while millions of Atlantans are sweltering in 100-degree heat less than an hour away, a few lucky souls are enjoying cool breezes and unobstructed mountain views at Falling Waters.

Large acreage home sites – the average is approximately six acres per home – give Falling Waters a distinctive sense of privacy. Thanks to this low-density approach, some 80 percent of this mountain community will always remain pristine hardwoods, canopied forest, and meandering creek beds.

Homes are subject to strictly enforced covenants. Land values and the aesthetic appeal are further enhanced by architectural guidelines. Home exteriors must utilize harmonious materials as well as feature colors that accentuate earth tones. Similar foresight went into the landscaping guidelines, which seek to minimize the impact on native flora and the surrounding forest.

The soothing sound of Clear Creek is one of the resort’s many signatures.

It is this rare combination – complete privacy in a breathtaking mountain community coupled with convenient access to one of the country’s most vibrant metropolitan areas – that fosters a one-of-a-kind lifestyle found only at Falling Waters.

Mile after mile of verdant trails offer ample opportunity to hike and to explore, to bird watch, and to soak up Mother Nature. The lay of the land varies in altitude from 2,500 feet above sea level to almost 3,000 feet. And the vast majority of acreage at Falling Waters will remain undeveloped in perpetuity.

Yet when travel beckons and the need arises to catch a flight across country or even overseas, the world’s busiest airport, Atlanta Hartsfield-Jackson, is just over an hour away via Interstate 75. Have a client meeting at a Fortune 500 company? Coca-Cola, The Home Depot, UPS, and Delta Airlines all call Atlanta home.

Those who prefer to telecommute can rest assured knowing that they are dialed in via high-speed, fiberoptic cable. Every tract at Falling Waters comes complete with underground utilities already in place.

Sooner or later the bright lights of the big city beckon. Few can rival the variety of choices a short drive from Falling Waters. National Geographic Traveler put it best:

“Atlanta is a hotbed of upscale shopping, creative cuisine, and an exploding arts scene. Locals are passionate about college and pro sports, but also about foie gras, collard greens, and pecan pie. Neighborhoods like trendy Virginia-Highland and upscale Buckhead share cultural space with alternative Little Five Points and East Atlanta Village. The heart of the Southeast has a captivating intersection of liberals and conservatives, blacks and whites. New attractions – the Georgia Aquarium, Atlantic Station, Cobb Energy Performing Arts Center, and the recently redeveloped World of Coca-Cola – show that Atlanta, ever re-defining itself, has no plans to rest on its laurels.”

Attention to detail is a hallmark of the infrastructure at Falling Waters.

For Developer Mike Patten, Falling Waters offered a welcome opportunity to step back into his preferred niche: land. For decades, the Patten family has evaluated, acquired, improved, and marketed thousands of square miles of land to satisfied clients, and it has made a name for itself in just about every corner of the U.S.: the Rocky Mountains, the Gulf Coast, the Deep South, the Mid-Atlantic, and in Patten’s native Northeast.

“Our buyers are end users, not speculators,” Patten says. “Developers and flippers who got into land speculation are interested in a quick buck. When you fulfill people’s dreams of owning a piece of land like we do, your clients buy for the right reasons.”

Patten’s development company was one of the few to survive and prosper during the Great Recession, something he attributes to being in the right place at the right time. An example of this trait would be his long-term partnership with Will and Mark Adkins of the Waterfront Group.

“I’ve been working with Will and Mark since they launched The Waterfront Group in 1994. Those two go first class all the way: on the projects they develop and with their giving, too. Just take a look at Camp New Hope, their nonprofit, no-charge facility for families who have children with life-threatening medical conditions. That place tells you all you need to know about those guys,” Patten says.

According to Will Adkins, there is no question in his mind as to the most appealing feature of this North Georgia resort: timing.

“Right now at Falling Waters, buyers have an incredibly rare opportunity to purchase some of the highest quality property in the Georgia mountains and to pay below developer cost. It’s a time-sensitive window, and it ties back to the Great Recession and some of the investment opportunities created by the downturn. That’s what so exciting for us, to bring to market a place this great at prices no one has seen in a decade,” Adkins says.

In addition to the drop-dead setting, easy access to Atlanta, the strong team behind it, and spot-on timing, one final key attribute distinguishes Falling Waters from other communities on the market in the Southeast. In 2014, it was selected as Georgia’s premier Land Report Certified Community. 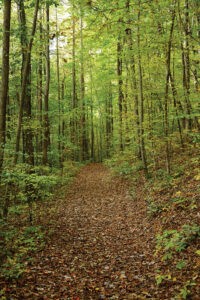 More than 80% of Falling Waters will remain undeveloped leaving miles of pristine forest and wooded trails for generations to come.

“We established this program to give buyers peace of mind. Think of the Land Report Certified Community logo as CARFAX® for land,” says Land Report Publisher Eddie Lee Rider Jr. “It all involves the Great Recession. When the economy imploded, hundreds of developments went belly up, and a lot of toxic assets were created. Now that the economy is back on its feet, outstanding buying opportunities have emerged, ones that come along only once in a generation. The question is how do you tell the difference between a true opportunity and a potential lemon? These are the sorts of questions buyers are facing, and that’s what gave us the idea for the Land Report Certified Community.”

“Are the amenities and the infrastructure completed or is the development half-baked? What about the homeowner’s association? Is it up and going, or does it exist in name only? And then of course there’s the developer. Do they have an established track record or are you dealing with some bottom feeder that bought a note and is trying to offload as many lots as quickly as they can?” he asks.

“One thing is for sure,” Rider adds. “We know that the Patten family is in it for the long haul. They pioneered the resort community development and have completed projects in more than 40 states. [See The Land Report Summer 2009.] For decades, they’ve been the driving force behind topnotch mountain communities like Falling Waters. Their success has been chronicled in publications such as The Wall Street Journal, Fortune, and of course right here in The Land Report. Without a doubt, these guys are the best in the business. What am I saying? They created this business. And it shows.”