Clint Eastwood Goes One on One with The Land Report

Clint Eastwood sticks to his guns. Not just when creating iconic characters such as Rowdy Yates, “Dirty” Harry Callahan, and Bill Munny or in his scintillating body of work as a director, but as a landowner. He’s interrupted a family… 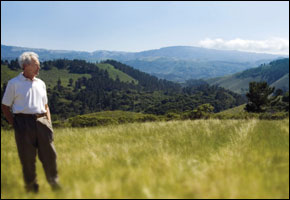 Clint Eastwood sticks to his guns. Not just when creating iconic characters such as Rowdy Yates, “Dirty” Harry Callahan, and Bill Munny or in his scintillating body of work as a director, but as a landowner. He’s interrupted a family vacation to discuss his breathtaking development overlooking California’s Central Coast.

Right now he’s hammering home a point, one that applies not just to him but to everyone who wants to buy and build on a special piece of property. “It’s your private domain, and in the end, you’ve got to make yourself happy, not anyone else,” he says.

That’s exactly what Eastwood has done at Tehama, a 2,040-acre swath of rolling hills and rugged canyons high above Monterey Bay with panoramic views from Point Lobos to Santa Cruz. Deer, fox, turkey, quail–scores of species inhabit the pristine property, yet its strategic location is an integral aspect of its appeal. “We’re just a few miles as the crow flies from the Pacific, 10 miles from Carmel, and just 5 miles from the airport. It’s slightly back from the fog belt. We’re just on the edge. It’s sunny up there,” he says.

“People like me are looking for a place where they can have a quiet life and yet still be close to things. Me? I like elbow room. But it’s nice to know that if I want to go to the Carmel Bach Festival or listen to some jazz in Monterey or watch the Concours d’Elegance in Pebble Beach, it’s just minutes away. If you want to go to dinner in Carmel or Monterey, you don’t have to drive forever to get home,” he says. He laughs off my next question.

“I bought it I can’t even tell you how long ago–over 30 years,” he says. “I was drafted in the Army in 1951 and was stationed at Fort Ord [a nearby Army base overlooking Monterey Bay]. I always liked Carmel. I thought if I ever could afford to or figure out how to make a living there, I might like to live there.” Eastwood not only figured out how to make a living but eventually bought a “little house as a weekend retreat,” as he puts it. It was the first of many investments he made in local property, but it may have been the most important one. In buying that small house, he fulfilled a commitment to himself, one that would have long-lasting implications. “Finally I just moved up there permanently,” he says.

In the late 1960s and early 1970s, Eastwood’s career as a filmmaker took off. Proof came in 1972 when he bested John Wayne as Hollywood’s top box-office draw. By this time, the Monterey Peninsula had become more than just a place to call home. His directorial debut, Play Misty for Me (1971), was filmed locally. He would christen his production company Malpaso, the name of a local creek. He once owned the popular Hog’s Breath Inn. And in a move that brought his adopted hometown national and international media coverage, he served a term as mayor of Carmel-by-the-Sea from 1986 to 1988.

In retrospect, however, it is his legacy as a landowner where he has made his greatest mark. Eastwood purchased Carmel’s historic Mission Ranch and saved it from almost certain demolition. The 22-acre property dates back to the 1850s and features stunning views of Point Lobos and Carmel River Beach. During California’s gold rush, Mission Ranch was the site of one of the state’s first dairies, and its contemporary setting, just south of the city itself, made it a natural gathering place. Barn dances and dining at the ranch restaurant were tried-and-true local traditions, ones Eastwood first came to know during his days at Fort Ord. By 1986, the then owners had turned down several offers aimed at preserving the historic farm house, meadows, and wetlands. A modern multi-unit development seemed imminent. Then Eastwood stepped in, upped the ante, and purchased the property himself. Shortly afterward he announced his intentions, saying simply, “I will do the best I can to keep it like it is.”

Decades later, that was clearly his mantra at Tehama. Many of the existing roads follow deer paths and old ranch ruts. Carmel Stone, a lightweight native shale found at the property, is used throughout. Tehama’s nursery uses seed stock gathered on-site: California live oak, Monterey pine, and California buckeye. Meadows are used as storm water basins, slowing runoff and replenishing the aquifer. Wastewater gets reclaimed and is then used to irrigate the championship golf course. Solar energy helps power the club house.

As Eastwood talks about Tehama, a distinct echo emerges, one that harkens to his experience at Mission Ranch. “I didn’t ever want it to be a high-density development. An awful lot of developments have fairly good density. I didn’t want to do that,” he says. To that end, more than 85 percent of Tehama’s 2,040 acres was reserved as natural open space. The infrastructure, amenities, and 90 homesites account for only about 300 acres.

The story behind the Tehama Golf Club and its Jay Morrish championship course illustrates his long-term approach. “We waited and waited and waited,” Eastwood says. “Finally the property next door came on the market. It had the potential for a golf course, so I bought that from the guy next door.” His original 500-acre investment took decades to grow fourfold to its present size. “That process was probably a lot like getting a movie into production: very time-consuming and labor intense.”

Eastwood notes that membership at his golf club is by invitation only. Exceptions are made, however, for a certain group of longtime locals. “It’s been amazing how the wild turkeys have done. The deer multiply like crazy. They’ve become much less skittish. Just hanging around for free food. There’s a lot of wildlife up there, especially since we’ve put in the golf club,” he says with a laugh.

“We did it all with native grasses. The only thing we seeded was the greens,” he adds. “The late John Zoller was our guy. He got us experimenting with native grasses. … We didn’t cut a lot of trees. We moved a few around: 200- and 300-year-old oaks. Slid them 25 yards over. The trees are very healthy up there. Much younger.”

Investments such as Tehama, Mission Ranch, and the Pebble Beach Company are not Eastwood’s only ties to the land. He has also donated several key parcels to the Big Sur Land Trust.

“My dad likes to buy land and leave it,” says Alison Eastwood in a subsequent telephone interview. “He’s all about slowly building and doing stuff, keeping everything very sparse. He likes to make subtle changes and find simple ways to keep the land very natural, wild, and untouched.”

In that regard, his legacy speaks for itself. Perhaps the most telling insight into his long history of buying and preserving land in and around the Monterey Peninsula is his underlying motivation. When I ask him the simplest of questions–why he bought the property that would become Tehama in the first place–he gives the sort of answer one would expect from Clint Eastwood: “Because I liked it.”