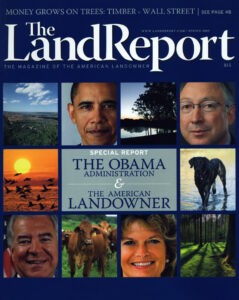 A New Era in Washington

A New Administration and a New Supreme Court Justice Will Have a Major Impact on Landowners.

To the long list of despicable decisions handed down by the Supreme Court, landowners include Kelo v. New London (2005), which affirmed the City of New London’s decision to condemn the properties of dozens of homeowners to further economic development. Americans of all walks of life were stunned to learn that the taking clause of the Fifth Amendment had so expanded. No wonder eminent domain has been labeled the “despotic power.” The Wall Street Journal neatly summed up the court’s 5-4 decision:

“The Supreme Court has written some despised rulings over the years, but last year’s Kelo case is fast rising up the list of the worst.”

I bring up Kelo for several reasons. First of all, on page 16 Trey Garrison reviews a new book on the case, Little Pink House. No matter if you own 1 acre or 1 million, this is a must-read. Buy the book and arm yourself against further incursions against your rights.

Secondly, I want to point out what I consider to be the true lesson of Kelo. Although the court’s decision was a disappointing conclusion to a long legal battle, the most important steps in this case were initiated by private citizens. The New London Development Corporation (NLDC) was no secret society of paper-pushing bureaucrats. It was manned by volunteers. Claire Gaudiani was president of Connecticut College. George Milne was a Pfizer executive (who failed to recuse himself when his employer emerged as the likely recipient of the land being condemned). Steve Percy was (and is) a real estate broker, who lists his service as a NLDC director at the website of his employer, Pequot Commercial. These people don’t wear black robes. They belong to the Rotary Club. Protecting your property rights begins at home.

Lastly, the federal government does have a huge say in the policy matters that affect public and private land. That’s why I tasked Joe Guinto with taking a close look at the officials whose decisions affect all landowners. As the Voice of the American Landowner, this magazine’s charge is to monitor their policies, broadcast their views, and offer our support and dissent when needed.

Which is why I conclude by urging President Obama to nominate a replacement for Justice Souter who strongly supports landowners’ rights. Those of you who read Jeff Benedict’s book know that Souter sided with Justices Breyer, Ginsburg, Kennedy, and Stevens in this “despised ruling.”

Posted in Back Issues