This is the second in a series of posts by Field Reporter Joe Nick Patoski that looks at the wildfires currently raging out West. With the Waldo Canyon and the House Park fires raging for weeks, the month of June… 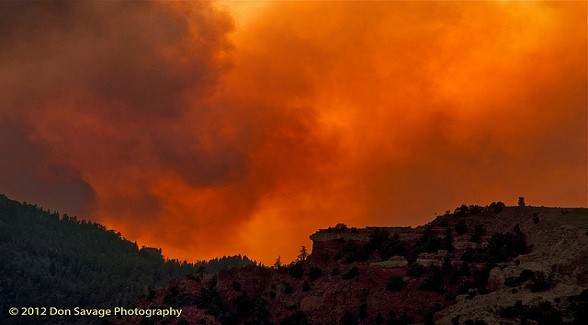 This is the second in a series of posts by Field Reporter Joe Nick Patoski that looks at the wildfires currently raging out West.

With the Waldo Canyon and the House Park fires raging for weeks, the month of June goes down as the most destructive for wildfires since Colorado became a state.

It wasn’t always this way.

Early accounts of wildfires in the American West by European settlers were spotty, at best, mainly because the West is so big and there were so few settlers, at least at first.

When forests burned, there was very little anyone could to do in response to protect property but let the fire burn, which is precisely what Native American tribes did when a big burn ignited.

Fire-fighting techniques have improved considerably over time, especially in the past 25 years. But even with the development of fire-retardants, employment of aircraft, smarter strategies, and constantly better technology, wildfires persist. If anything, man appears to be losing ground to nature on flame front.

Fire is part of a forest’s life cycle, taking down dead and sickly timber, clearing out brush and understory, and scarifying seedlings that require intense heat in order to germinate. It works the same way on prairie grasslands and the plains. Without fire, the vegetation wouldn’t thrive.

Even severe fires caused by heavy fuel loads are normal cyclical occurrences; the big differences are how the cycles have become more frequent, and how more than a century of fire suppression as sound land management, a philosophy spurred largely by the establishment of cattle and other livestock operations, has created an unprecedented heavy fuel load.

It’s important to note that different types forests burn differently, depending on the dominant forest tree and elevation.  A century can pass between severe wildfires in high elevation forests dominated by lodgepole pine, aspen, spruce, and Douglas fir. Lower elevation forests with piÃ±on pine, and junipers tend to be drier which leads to more frequent fire events — every decade or two. This keeps forests open and less dense.

The West used to be emptier too. Construction of homes in and around forests has skyrocketed since the 1970s, creating a precarious wildlands-urban interface (WUI) as Colorado State researchers David M. Theobald and William Romme label it. As civilization encroaches, management of forests becomes considerably more difficult. And what provides bucolic scenery most of the time to those arboreal interlopers also provides all the necessary tinder to leave nothing but ashes if flames reach a domicile.

Nationwide, the WUI encompasses an area about 14% larger than the state of California, with an estimated 89% of that wildlands-urban interface privately-owned. That means it is private landowners who will most likely shoulder the burden of wildfire management and prevention strategies such as managed thinning of forest and prescribed burns.  Federal and state government planning is limited to federally- and state-owned lands.

Still, sound management practices can only do so much.  Increased human population, construction in the wildlife-urban interface, a build-up of tinder in the understory due to more than a century of fire suppression are mere enablers compared to a warming climate. Increased temperatures leading to earlier spring thaws and less snow melt appears to be the biggest driver behind the increase of severe wildfires.

The West was considerably wetter when wildfires in the American West first began to be studied. The climate has turned drier over the past century and a half. Add to that a perfect storm of more immediate weather conditions: the interior West is in extreme drought and in late June, a record-breaking heat wave settled over the southern and central Rocky Mountains accompanied by dry humidity and winds.

Katharine Hayhoe is an atmospheric scientist at Texas Tech University. She is also the co-author of a study that appeared in the journal Ecosphere concluding the risk of wildfires in the American west will increase as a result of climate change.

“Climate change is shifting rainfall patterns around the world,” Hayhoe told the Living on Earth radio program. “We’re also seeing that climate change is increasing our average temperatures, which raises the risk of having those hot, dry conditions that we need for a wildfire to spread.”

Colorado is fortunate to have numerous experts at Colorado State University who are studying the past, present, and future of western wildfires.

“A great understanding has developed about historical fire stories in Colorado,” says Dan Binkley, Professor of Forest Ecology at Colorado State. “The first thing to emphasize is we have a grand variety of forests across the West, and the fire stories that go with the landscapes are very different for different types of forests.”

Depending on one’s location, property owners have tools to prepare and protect themselves and their property, says Binkley.

“For homeowners, the most effective options are to learn about ‘firewise’ treatments to reduce the flammability of the local area around a house; join with a community to develop a Community Wildlife Protection Plan; and work with the community and adjacent land managers, such as public land people, to reduce the most severe risks at landscape scales. “

Binkley recommends tapping into the Colorado State Forest Service for information on all the above options.  The statewide forestry staff visits and works with Colorado landowners.

All well, and good, but reality has yet to catch up to the knowledge. Since 2002, the contracted fleet of airborne fire-fighting tankers that the US Forest Service depends on has declined from 44 to nine while there have been six deadly crashes, all of them involving aircraft more than 50 years old.

Similarly, the US Fire Protection Program Analysis system, which was launched in 2002 in response to a history of all-out fire suppression, has yet to be implemented, although the computerized program that would coordinate fire-fighting agencies and responders to assess and reduce risk and control costs, was supposed to be online in 2007.

The failure to efficiently coordinate agencies and responders mattered not a whit to Dr. Bonnie Warnock, chair of Natural Resource Management at Sul Ross State University in Alpine, who got a call at the school last year that her ranch was burning.

“My heart said no but my head said it was OK,” she said.

Dr. Warnock rushed to her place.

“It was very stressful. The whole back pasture was burned, the boundary fence was on the ground. What do I do? I had not planned at all. How do I deal with this financially and emotionally? We have to sell one-third of our cows. We don’t have enough feed. That’s a capital investment for us that we are having to sell off and we’ll have to buy more back,” Warnock said.

She knew too well the fire was part of the process.

“Historically, our landscape did evolve with fire. If you’re looking at it from a plant perspective, this is not a catastrophe. This is a natural occurrence for the semiarid ecosystem we live in. Typically, we have two or three wet years followed by a dry year during which lightning strikes cause wildfires. This process has maintained the grasslands and kept brush from encroaching.”

That is, until the pioneers arrived and established permanent communities. “When early European settlement of this region began in the late 1800s, there was a lack of understanding of this process and land was overstocked and overgrazed,” Dr. Warnock said. “Drought was something the settlers weren’t experienced with. The overstocking and overgrazing removed the grass and fires disappeared from the Trans-Pecos.”

Range science changed that practice. “Since the science of range management developed in the 1950s, our ranchers have done a good job,” Dr. Warnock pointed out, while adding the caveat that even sound practices can do only so much.

“Through this most recent wet period, they haven’t been overgrazing and overstocking, which has benefitted the ecosystem. But over the past three years, we’ve grown a huge amount of fuel in the Trans-Pecos, so the first fire in 100-150 years since the region had been settled was extremely large. It was so big we weren’t prepared to deal with it. This is unprecedented.”

As critical as the drought and wildfires have been, the next few months afterwards were even more critical. “If we get rain in the next month or so, the country will come back and look better.  If it doesn’t rain we will lose perennial grasses and see an increase of desertification,” Warnock said.

This awareness has led to the formation of a non-profit association in Far West Texas that uses prescribed fire as a management tool to reduce fuel loads. “Going forward, this is something we need if we are going to have green grass,” Dr. Warnock says, acknowledging a perception issue with prescribed burning from city and town dwellers and the new breed residing in the wildland-urban interface.”

“These people are at the highest risk if a prescribed burn gets away and at the greatest risk from wildfire. Most of these people come from cities and are not supportive of prescribed fire. That makes it difficult to employ this tool,” Dr. Warnock says. “There is a lot of support for prescribed fires by ranchers. We need to educate small landowners living on the edge of towns.”

“We need to work on finding mechanisms to reduce accidents. How do you keep people from welding or throwing out a cigarette when there’s 45 mile per hour winds and 2 percent humidity? “

Like the rest of us, even though she knows what she knows, Dr. Warnock has no interest in seeing it all happen again.

Read part one of this series here.