The Donation of One of the Seven Wonders of the New World Takes Top Honors as The Land Report 2013 Deal of the Year. In 1774, two years before he penned the Declaration of Independence, Thomas Jefferson purchased Virginia’s Natural… 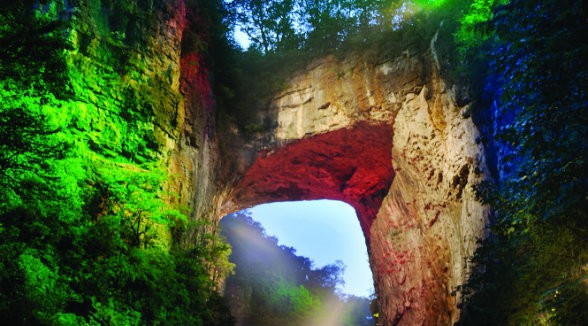 The Donation of One of the Seven Wonders of the New World Takes Top Honors as The Land Report 2013 Deal of the Year.

In 1774, two years before he penned the Declaration of Independence, Thomas Jefferson purchased Virginia’s Natural Bridge from King George III. Jefferson’s goal? To ensure public access to the natural wonder he described as “the most sublime of nature’s works.”

And the total cost to the 31-year-old Virginian? Some 20 shillings. 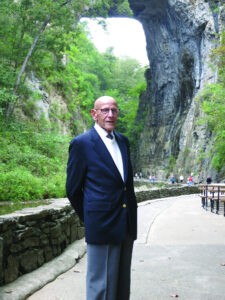 In 2013, Angelo Puglisi (right), the son of Italian immigrants and the owner the Natural Bridge since 1988, donated this national landmark to the citizens of the Commonwealth of Virginia.

The estimated value of the 88-year-old Washingtonian’s gift? $21 million.

Puglisi’s noble donation, one that honors Jefferson, our Founding Fathers, and the country that afforded the Puglisis endless opportunities and freedoms, is a stirring story in itself, for the Bridge is no ordinary collection of metes and bounds. It has been admired by presidents, celebrated by artists, and featured in classics such as Moby Dick.

Furthermore, Puglisi’s generosity required an extraordinarily complex series of transactions, ones that tested a team of seasoned pros racing against the clock.

For these reasons and to salute a timeless legacy that will be shared by millions of Virginians and Americans in perpetuity, Angelo Puglisi’s gift of the Natural Bridge has been selected as The Land Report 2013 Deal of the Year.

To the Native American Monacan tribe, it was the Bridge of God, a sacred site, where their forefathers defeated the Powhatans in battle. Centuries later, legend has it that a youthful George Washington surveyed the Bridge while in the employ of Lord Fairfax. The Sage of Monticello was so taken by the Bridge that he bought the landmark and a total of 157 acres from the Crown.

“It is on the assent of a hill, which seems to have been cloven through its length by some great convulsion. The fissure, just at the bridge, is, by some admeasurements, 270 feet deep, by others only 205. It is about 40 feet wide at the bottom, and 90 feet at the top … The fissure … opens a short but very pleasing view of the North mountain on one side and Blue ridge on the other … This bridge is in the county of Rock bridge, to which it has given name and affords a public and commodious passage over a valley which cannot be crossed elsewhere for a considerable distance. The stream passing under it is called Cedar creek. It is a water of James river, and sufficient in the driest seasons to turn a grist-mill, though its fountain is not more than two miles above.”

Jefferson built a two-room cabin for his guests, which would include James Monroe, Henry Clay, and Sam Houston. By the end of the 1700s, the Bridge was attracting the curious from America and abroad. In 1833, after Jefferson’s heirs sold the site, the new owner erected the Forest Inn to welcome an ever-increasing number of visitors. By the 1880s, the Bridge and the nearby Rockbridge Inn, owned by Colonel Henry Parson, had become a popular resort.

By the time President and Mrs. William McKinley visited in 1899, the Bridge was considered one of the Seven Wonders of the New World. In Moby Dick, Herman Melville likened his great white whale to the Bridge. Countless landscape painters, including David Johnson and Frederic Edwin Church (below), memorialized it on canvas.

More recently, the Caverns at Natural Bridge – among the deepest and most spectacular on the East Coast – opened to the public in 1978, and it was designated a National Historic Landmark by the Interior Department in 1988.

That’s right about the time Puglisi entered. A prominent East Coast real estate developer, he learned of the Natural Bridge through a friend in Charlottesville who suggested Puglisi buy it. At first, Puglisi didn’t think the Bridge fit his plans. The friend persisted.

“When I finally saw this natural wonder, and started learning its history and its connection to our Founding Fathers – the men who made my father’s dream and the dreams of millions of other immigrants possible – I knew it had to be protected for future generations,” says Puglisi. “I didn’t want a zip line running off it.”

Since 1988, Puglisi has owned and operated the site and its attractions, including the Natural Bridge Hotel, Native American Village complex, and an additional 1,200 acres of hardwood forest and pasture.

In 2008, for estate planning purposes, Puglisi decided to put the Bridge on the market. Thanks to the Great Recession and a $39 million price tag, he got no offers. In 2013, he approached Jim Woltz of Roanoke-based Woltz and Associates, a brokerage and auction house specializing in timberland and conservation easements.

Tiny Cedar Creek, a tributary of the James River, was the force that carved the massive limestone landmark.

Woltz says, “We were moving toward an auction. We had all the paperwork done. Angelo pulled me aside and said, ‘Now, here’s what I really want you to do. I want you to figure out how to get this to a state or national park so that we preserve this history. I’m afraid that in 20 years people aren’t going to know who Thomas Jefferson was. He is the very reason for the success I’ve enjoyed.’”

While his office prepared for the auction, Woltz arranged environmental surveys of the property. He also met with the director of the National Park Service, Jonathan Jarvis. The agency couldn’t purchase. It could only accept it, pending a positive reconnaissance survey. Not surprisingly, the survey deemed the Natural Bridge highly desirable.

While working with Puglisi on the Natural Bridge sale, Woltz was involved with Tom Clarke on a conservation deal involving a mountaintop property coveted by Virginia Department of Game and Inland Fisheries. Woltz decided to pitch the Natural Bridge to Clarke, who founded Kissito Healthcare, a well-known Roanoke-based nonprofit.

“Here was a national monument of great beauty and historical importance, one of the Seven Wonders of the New World,” Woltz says. “The income stream on just the ticket sales totals $2 million per year.”

Like many Virginians, Clarke had visited the Natural Bridge several times. His enthusiasm only grew as he studied the site’s history and assets. He decided to get involved.

“We like to figure out how to take large parcels of land and generate income from them that can be used to do positive things for the land itself or other charitable causes,” Clarke says.

Woltz and Clarke approached the Virginia Department of Recreation and Conservation to ascertain interest in the Natural Bridge and to request a reconnaissance study. Woltz has a long, productive relationship with the department, having personally donated land for the popular New River Trail.

Much to everyone’s delight, the state’s reconnaissance team discovered several important ecological resources and deemed the property extremely desirable as a state park. Woltz and Clarke then arranged a loan through the Virginia Clean Water Fund, and began the arduous process of acquiring mandatory appraisals and permits.

“It is impossible for the emotions
arising from the sublime, to be felt
beyond what they are here …”
Thomas Jefferson,
Notes on the
State of Virginia

Says Clarke, “When it came to the Natural Bridge, we were fortunate that one of our subsidiaries is a conservation entity, so we qualified for some very cost-effective capital.”

Unfortunately, the funding came up short. Puglisi had two options: He could give the Bridge to the state, recover some of his money through tax credits, and fall short of his original financial goals, or he could go ahead with the auction and potentially jeopardize the long-term preservation of the Bridge. Puglisi didn’t hesitate.

“Go for the state park deal,” he said.

In preparation for the auction, the holdings had been divided into 35 tracts. The 188-acre Natural Bridge parcel, valued at $21 million, was donated to Kissito’s Virginia Conservation Legacy Fund (VCLF). Since the deed involved a conservation easement, the state gave Puglisi tax credits worth about $7 million. The terms require VCLF to release the property to the state, less the hotel and cottages, once VCLF retires the $9.1 million note used to purchase the remaining 1,200 acres. Clarke plans to retire the note by the end of 2015 using ticket and hotel revenue, and additional donor funds.

The parcels containing the hotel and cottages were transferred to a newly formed, for-profit, limited partnership, set up through Kissito. Clarke has already hired hospitality consultants and is raising capital for hotel renovation. He hopes to operate the facility as a “Friend of the Park,” to raise money for improvements and other good works. Long story short, the Natural Bridge won’t cost Virginia taxpayers a single cent.

Thanks in large measure to his prowess as a surveyor, the Father of Our Country was a seasoned landowner. He reportedly surveyed the Natural Bridge in 1750.

Virginia State Park Director Joe Elton considers the Natural Bridge acquisition the most complex – and satisfying – land deal he’s seen. “There was political commitment right off that if the property came as a gift, we could do it. If we had to raise our own money to buy it, we probably couldn’t do it,” he says. “Fortunately Tom Clarke can take extremely complicated concepts, boil them down to manageable size, and recognize paths that aren’t obvious to other very smart people. I don’t know how many times I put down the phone, certain that the deal was dead. But somebody would always come up with a way forward. To say that Jim and Angelo were in a state of high anxiety, not just over the complexity of the deal, but from having to trust the government and government programs, would be an understatement. You make the donation and then hope the agencies decide in your favor. That’s quite a leap of faith for a businessman.”

Elton adds, “The commitment was there. In the back of everyone’s mind was the possibility that someone with a huge bank account would buy the property and do something with it we’d all hate.”

Clarke is already working with Elton and his staff to develop exhibits and educational programs to ensure a seamless handoff from Natural Bridge Park to Natural Bridge State Park.

“The esprit de corps among the teams is phenomenal. It’s everybody pulling together. You sure don’t see that every day,” Elton says. Within a decade of the state park’s opening, he anticipates 1 million visitors annually.

Puglisi is especially excited about the educational programs being developed that will feature the Founding Fathers.

“The Bridge and its history are as precious as the Liberty Bell,” Puglisi says.

Woltz holds Puglisi in similar regard.

“This is a great story about how a person was inspired because of what a property meant to him,” he says. “Angelo was willing to sacrifice a lot of the money in order to make the Natural Bridge a state park. It wouldn’t have been possible without a lot of commitment from everyone involved, and the Virginia Conservation Tax credit. But the real hero here is Angelo, not us.”

The Natural Bridge of Virginia

The Land Report 2013 Deal of the Year sponsored by: