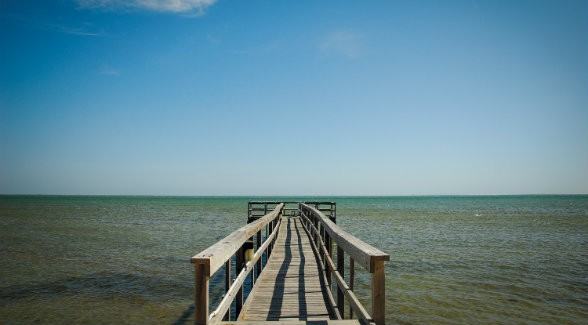 A multipartner coalition acquires the 17,351-acre Powderhorn Ranch for $37.7 million.

On Aug. 21, 2014, a multipartner coalition announced the purchase of the 17,351-acre Powderhorn Ranch in Calhoun County. At $37.7 million, it is the largest dollar amount ever raised for a conservation land purchase in the state. In years to come, Powderhorn Ranch is expected to become a state park and wildlife management area.

“If ever there was a sportsman’s paradise, it’s the Powderhorn Ranch,” says Carter Smith, Texas Parks and Wildlife Department executive director.

“The place is literally teeming with fish and wildlife. And if you like to wade-fish, or canoe or kayak to catch a tailing redfish, or catch a trout or flounder, the bays and back bayous and marshes are going to be the places for you. If you like to hunt, the game there is just simply extraordinary – from deer to ducks and doves and bobwhite quail. And if you like to bird-watch, there’s no place finer.”

The acquisition will protect the sprawling prairie, wind-sculpted coastal live oaks, and Powderhorn Lake, a tidally influenced, secondary bay off Matagorda Bay. The range of habitats is perfect for hunting, fishing, hiking, paddling, and birding. The property also includes thousands of acres of freshwater wetlands and salt marshes, which provide natural filtering to improve water quality and also shield people and property from storm surges and sea level rise. 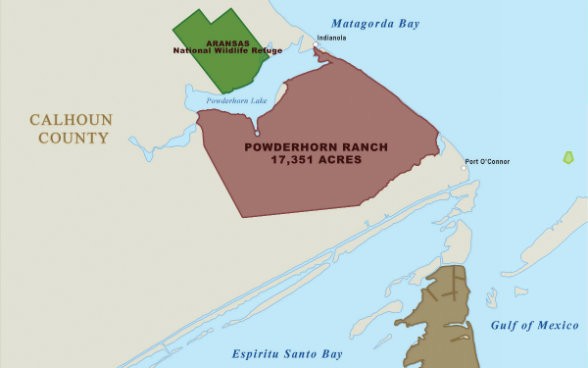 From the 1950s to the early 1990s, Texas lost more than 200,000 acres of coastal wetlands, but the Powderhorn acquisition helps combat this trend. The ranch includes more than 11 miles of tidal bayfront on Matagorda Bay and provides habitat for hundreds of species of birds and animals, including the endangered whooping crane.

The Texas Parks and Wildlife Foundation is spearheading fundraising for the $50 million project, which includes purchase of the property and a long-term endowment for habitat restoration and management.

A major portion of the funding comes from the National Fish and Wildlife Foundation’s Gulf Environmental Benefit Fund, created with dollars paid by British Petroleum and Transocean in the wake of the Deepwater Horizon oil spill. NFWF has committed $34.5 million over three years, making this the largest land acquisition in the nation to date using BP spill restoration dollars.

To facilitate the purchase, the Conservation Fund and the Nature Conservancy of Texas are providing $10 million each in interim funding to buy the property in 2014. The two organizations will be reimbursed by the Texas Parks and Wildlife Foundation, which will hold title on the property by the end of 2016, and will ultimately turn it over to the department.

It will be years before the property opens to the public as a park, something that will depend on balancing other needs facing the state park system. But the partners were able to seize a historic opportunity to use BP spill restoration funds and act now to protect a long-sought treasure.

“We have to think of places like the Powderhorn in generational terms,” Smith says. “These are the proverbial trees that we’re planting so that somebody else can enjoy their shade. And if we didn’t take ambitious steps, we wouldn’t have any more state parks for our growing public to enjoy.”

The TPW Foundation is still seeking donations to fund the Powderhorn acquisition, which is part of its statewide fundraising campaign called “Keeping it Wild: The Campaign for Texas.” More information is online at www.tpwf.org.

“Powderhorn is going to be one of those places that we look back on for generations to come,” Smith says. “We’re going to thank goodness that we had the courage and the foresight to acquire this place.”