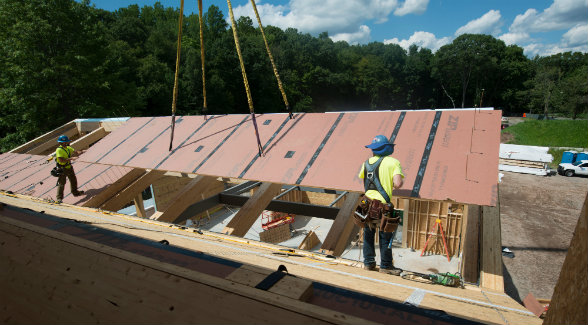 LEED PLATINUM | Portions of this 15,000-square-foot school building were built off-site, including structurally strong wood that was glued together.

Trees are some of our BEST ALLIES in solving the climate crisis. — Frank Lowenstein, Brian Donahue & David Foster

Across North America, trees stand ready to help us solve the climate crisis. Trees remove carbon dioxide from the atmosphere and store it in their wood. One way to respond to a challenge from the United Nations Secretary General António Guterres to seek “bold action and much greater ambition” on climate change is to protect forests from development, improve forest management, and use sustainably harvested wood to build tall buildings. This will allow us to pump carbon from the atmosphere and store it both in forests and in cities. It will also support rural economies, improve wildlife habitat, and create more affordable housing.

This opportunity arises from cross-laminated timber, or CLT. First introduced in the 1990s, it enables architects and engineers to design tall, fire-safe, and beautiful wood buildings. Recent examples in the United States include the seven-story T3 building in Minneapolis, the eight-story Carbon12 building in Portland, Oregon, and a six-story dormitory at Rhode Island School of Design in Providence. In Canada, Norway, Sweden, England, and Australia, even taller wooden buildings are already in use. The Mjosa tower in Brumunddal, Norway, is only 25 feet shorter than the Statue of Liberty.

Private industry is gearing up to provide engineered wood for more tall wood buildings here in the United States. This year a highly automated, large CLT plant opened in Washington state. Recently, the first ever CLT plant in New England was announced in Maine.

The energy embodied in the materials for new buildings around the world — mostly steel and concrete — accounts for 11 percent of global carbon emissions. Typically, coal is used to heat these materials to temperatures over 2,500 degrees Fahrenheit in the manufacturing process. 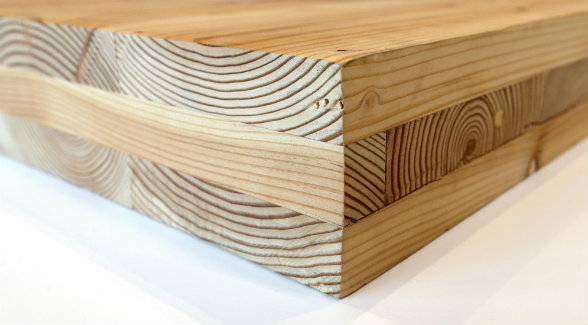 CROSS-LAMINATED TIMBER | Commonly referred to as CLT, crosslaminated timber is constructed from 2-by-4 beams that are arranged in perpendicular layers and then glued together to make giant panels.

Wood, in contrast, is forged from sunlight. A study by scientists from Yale University and the University of Washington showed that expanding wood construction while limiting global harvesting to no more than the annual growth could produce a combination of emissions reduction and carbon sequestration equivalent to eliminating construction emissions altogether. This could take a big bite out of the carbon problem, roughly equivalent to the present contribution from all types of renewable energy.

One study conducted by researchers in British Columbia found that building a five-story office building with wood had less than a third of the global warming impact when compared with a steel and concrete building of the same size. Beyond taking less energy to produce, wood buildings store carbon that otherwise would have returned to the atmosphere as those trees died and began to decay. The wooden structure of the new 18-story Brock Commons dormitory at the University of British Columbia in Vancouver, for example, stores 1,753 metric tons of carbon dioxide. That carbon will be locked up for decades, if not a century or more, until the building is torn down, and if the wood is subsequently reused, perhaps even longer.

Additional benefits come from the fact that these new wood technologies make it affordable to construct mid-rise housing of 6 to 12 stories. Conventional wood framing is limited to five stories by building codes, or six stories if a concrete first floor is included. The high cost of materials and construction — for example, renting a tower crane and hiring someone to operate it — usually pushes developers working to construct steel and concrete housing to design and build structures of more than 12 stories to provide a suitable return on investment.

Transportation hubs in the inner suburbs of cities in the United States are often surrounded by multifamily housing of only five or six stories. With CLT, those buildings could be taller, creating more housing close to trains, subways and buses, and a more compact urban development pattern. That would save forests on the urban fringe from being cut to make way for more housing, and cut emissions and congestion on highways. Taller mid-rise wood buildings would also help lower the cost of housing by increasing supply.

To stabilize climate and support the wood building revolution, we need to stop the conversion of forests to other uses — whether to pastures in the Amazon or to shopping malls, houses, and solar arrays near Amherst, Massachusetts. When forests are cleared for housing or other land uses, the carbon stored in the forest is typically released to the atmosphere, and the ability of the forest to capture future carbon is lost.

The Harvard Forest and Highstead Foundation are leading an effort to stop the land clearing for development that destroyed over 850,000 acres of forest between 1990 and 2010 and will consume 1.2 million more acres by 2060 absent a new approach. Harvard Forest’s Wildlands and Woodlands vision calls for conserving at least 90 percent of the remaining forests of New England, setting aside 10 percent as wild reserves where no trees are harvested. Retaining 90 percent of New England’s forests not only will help prevent climate change but also will provide about $700 million per year in improved human health and agricultural productivity and will sustain 30,000 jobs— and even more as new urban wood buildings come into their own.

A study by scientists from Harvard Forest and the Smithsonian Institution examined the carbon consequences of exemplary management to forests in Massachusetts. The results showed we could double production of wood while maintaining wildlife habitat, clean air and water, forest carbon, and recreation. In the heavily harvested industrial forest lands of Northern New England, there is even more potential for a greater carbon sequestration. The New England Forestry Foundation estimates that with exemplary management, these forests could absorb hundreds of millions of tons of carbon, removing as much carbon from the atmosphere as would be released by all seven million cars in New England for 20 years.

Forest ecosystems and wood buildings can be our most important climate allies. We should minimize the conversion of forests, enable more wood construction, and incentivize private landowners to improve their stewardship. Policies to achieve these goals should include greater state and local bonding to amplify the impact of private land conservation funding. Incentives that encourage the construction of wood buildings that are drawn from forests with outstanding management are key to our climate future and the future of the forest.

These policies will produce more carbon standing in beautiful, productive forests, which also provide the raw materials for equally beautiful, affordable cities to store even more carbon. This effort could unite rural and urban citizens toward shared goals — a livable climate, a viable economy, and a vibrant, living landscape.