One of the many city dwellers who have taken refuge on their land, GREG FAY shares how he and his family have made the most of life during the global pandemic. By Corrine Gaffner Garcia During the COVID-19 pandemic, landowners… 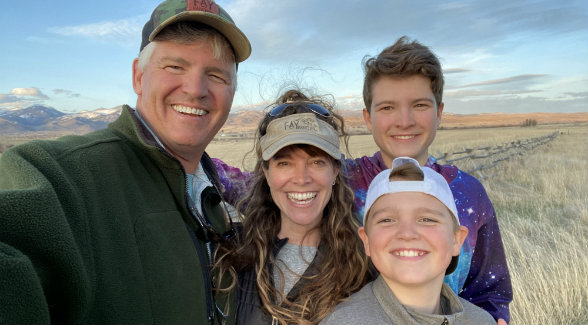 One of the many city dwellers who have taken refuge on their land, GREG FAY shares how he and his family have made the most of life during the global pandemic.

During the COVID-19 pandemic, landowners such as Greg Fay have holed up in the comfort of their Rocky Mountain retreats. Turns out the founder and owner of Fay Ranches has owned a ranch in Montana’s Ruby River Valley for more than 25 years. Although the Fays live just an hour away in Bozeman, when the shelter-in-place orders hit, they high-tailed it to the ranch. Greg’s boys and wife Shannon all have asthma and are at-risk.

“We had no other human around for six weeks. The little grocery store in town does curbside pickup. It just felt very safe for my family. The other thing that was wonderful? I probably caught more big fish this spring than I have in the last five years combined,” he says.

Fay feels extremely fortunate that his family has a retreat where they can social distance yet enjoy the many recreational opportunities that Montana has to offer. “It was an amazing six weeks,” Fay says. “It was almost like the rekindling of a romance. After 28 years of running my own business and having kids, we had never been at the ranch for that length of time during that time of year.”

On a typical day in quarantine, the family woke up and took their bird dogs on their morning walk. When they returned, his two boys, ages 11 and 14, hit the books or logged on to their computers, did their virtual schooling, practiced their instruments, and plowed through homework.

“And then around 4 or so, I’d go out fishing,” Fay says. “So when I say I’ve caught more fish, it’s because I’ve been able to take more time on the river. When I was single and running around in a camper van fishing, I had that immersion, I started to really watch the river. That’s what’s been happening here now.”

The Fays witnessed the transition from winter to spring firsthand. “We were able to watch spring emerge,” Fay says. “From the geese and sandhill cranes to the caddis and golden stones [hatching on the river]. There were no deer in our hay field.
Then the grass started to get greener. We saw these tiny little greens popping up, and deer flocked to it.”

It’s clear to Fay that others are taking a closer look at the Treasure State. Fay Ranches dollar volume of closed transactions was up by 34 percent and closed transactions were up by 18 percent through the first quarter of 2020. Website traffic has also spiked, up 32 percent over 2019.

“I think it’s a combination of factors. Because of the uncertainties of other investments in the stock market, bonds are going to go down and interest rates are going back up. Clients are looking to hedge inflation and are worried about all the money being printed. They want to put it into something stable and tangible, and land checks that box. Then you have the component of sheltering in place. Thankfully, we were able to come to our ranch, and it just feels very, very safe there for my family,” Fay says.

Fortunately, it’s easier than ever to get to Montana via commercial airlines. Bozeman alone has eight airlines that offer non-stop flights to 21 cities nationwide. With easy access to medical care (especially in the state’s larger cities) and no shortage of shops that carry supplies, one can ride out any storm. And, it’s a place where people can easily keep their distance yet still enjoy the great outdoors, fly fishing and hiking the days away to their hearts’ content.