I always wanted to be a Cartwright. To me, Bonanza wasn’t just some paint-by-numbers Western. The villains weren’t Indians or desperados. They were politicians, bankers, and railroad types, all of whom were hankering to get their hands on a piece… 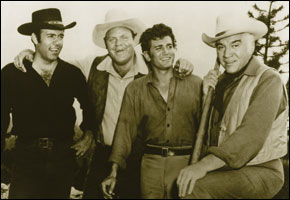 I always wanted to be a Cartwright. To me, Bonanza wasn’t just some paint-by-numbers Western. The villains weren’t Indians or desperados. They were politicians, bankers, and railroad types, all of whom were hankering to get their hands on a piece of the Ponderosa.

At its heart, Bonanza was a series about an American landowner, Ben Cartwright, who ranched 1,000 square miles of the richest timberland and grass country in the Nevada Territory. (Ben also sired three sons by three different wives, each of whom met suspiciously tragic ends, but let’s not go there.) Ben’s love of the land was evident from the first episode. More important, the insights and advice he gave his three sons are applicable to all landowners and worth their weight in silver.

Respect the land. In an early 1959 episode–keep in mind this was way before conservation became cool–the Cartwrights are shown cutting down a Ponderosa pine that Ben reckons is more than 400 years old. As they finish the job, Ben directs the boys to plant a new sapling. One out, one in–conservation’s golden rule.

Know your sheriff. For some reason, Virginia City seemed to attract more ingenious murderers than Dick Wolf could ever squeeze on Law & Order. Consequently, the Cartwright boys spent more time cooling their heels in jail than the Dallas Cowboys lineup in the mid-1990s. They were always innocent, and Sheriff Roy Coffee typically released them to Ben’s custody, which allowed the Cartwrights to capture the real killers. Even back then, Ben knew that it’s always better to get to know the locals before you need their help.

Never give an inch. When Samuel Clemens (a.k.a. Mark Twain) comes to Virginia City, he discovers a local judge conspiring with a robber baron to seize some prime timberland on the Ponderosa. The Cartwrights first fight with guns and then do battle at the ballot box, triumphing in part thanks to Clemens’ wit. Ben knew if he let the railroad set a precedent, developers with local politicians in their pockets would use eminent domain to carve up the Ponderosa like a Christmas goose.

Stewardship pays. Ben knew how to profit from his holdings and regularly leased timber rights. But woe unto hydraulic miners. Ben and his fellow ranchers fought bitterly to keep those scalawags from scarring their lands. Ben loved making money, but not by ruining the land.

Know your neighbors. At least once or twice a season, some gringo would ride into the territory and stir up the Paiutes. Invariably, the angry Indians would go on the warpath. Was it the cavalry or Hoss that kept the Ponderosa safe? No, it was Ben’s good relations with his Paiute neighbors. Talking over the fence every now and then pays big dividends when a bad wind blows.

It’s rare television magic that can engage a kiddie cowboy on a stick horse and still offer lessons that hold true decades later. You could do worse than channeling your inner Cartwright now and again. And if Ben is right, you can’t do much better than finding your own Ponderosa.