Just one look, and it becomes crystal clear that River Bend Ranch has everything one could want in a high country ranch. Muleys and whitetails mingle in lush hay pastures with elk, moose, and a small herd of Black Angus.… 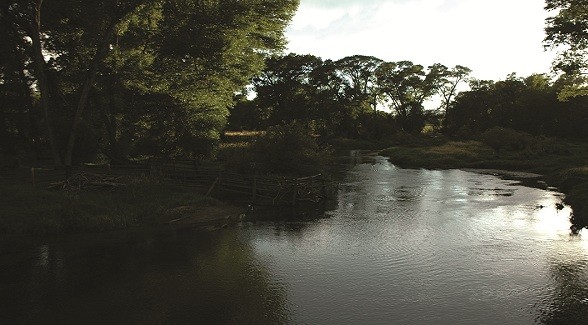 Just one look, and it becomes crystal clear that River Bend Ranch has everything one could want in a high country ranch. Muleys and whitetails mingle in lush hay pastures with elk, moose, and a small herd of Black Angus. Dense riparian woodlands teem with cottonwoods and wild cherry. More than six miles of the pristine Laramie River course through the heart of the Big Laramie Valley some 7,000-plus feet above sea level.

The viewshed on the 6,750-acre ranch features gorgeous vistas in every direction, particularly to the southwest where the tall peaks of the Snowy Range rise above the valley floor. A historic cabin, seven barns, three homes, a bunkhouse, a shop, and kennels top the long list of improvements.

Oh, and there’s one more thing about River Bend, and it’s got a lot to do with that six miles of the Laramie. “This is quite possibly the finest angling property Fay Ranches has ever listed,” says Greg Fay, founder of Fay Ranches. “The Laramie winds through cottonwood-forested river bottom, ideal habitat for large trout. We’ve landed several 20-to 24-inch browns and rainbows that have taken us upstream and down, around corners and under logs. It’s been fantastic. I can’t wait to get back down there and fish it again.” 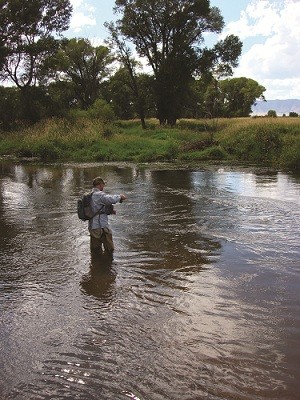 Yet River Bend’s many assets also include some not visible to the naked eye. Despite its remote setting, Laramie, the University of Wyoming, and commercial air service are an easy 20-minute drive. Valuable water rights are another key feature, according to ranch manager Jill Zimmerman, who lives on the property with her husband, John, an accomplished luthier.

Zimmerman is passionate about this property. She’s gone the extra mile to research the history of the ranch and those who have stewarded it over the decades, interviewing old-timers to glean anecdotes and insight and tracking down previous owners such as Lefty Cole, Laddie Smith, and James Wilson. During my visit, Zimmerman shows me the route the Overland Trail followed across the property. She discusses Native Americans who inhabited the valley. Some artifacts date back more than 10,000 years.

River Bend’s allure is not limited to its impressive resources or its historic legacy. Listed by Fay Ranches for $9.5 million, the donation and sale of this Rocky Mountain legacy ranch will play a critical role in bettering the American West. This unexpected storyline is the result of a unique collaboration between the University of Wyoming and River Bend’s current owner, Tim Mellon.

Mellon bought River Bend in 2005. He added two additional ranches, including the X Bar River Ranch. In doing so, he effectively quadrupled the size of the original property. A conservation easement administered by the Wyoming Game & Fish Department was placed on all but a section and a half of the ranch.

Kermit Brown views the donation of River Bend as a new paradigm in advancing range management. “Tim wanted to do something with this ranch,” says Brown, the attorney at Brown & Hiser in Laramie who orchestrated the landmark deal. “And the University of Wyoming and the state have made a significant commitment to combating diseases that affect livestock and wildlife,” Brown says.

Among them are brucellosis, a major concern in the northwest part of the state near Yellowstone National Park. The perils of chronic wasting disease are a statewide and national priority. Brown also mentions the looming specter of Rift Valley Fever from Africa. Like brucellosis, it, too, is jumping from species to species.

Thanks to Mellon’s gift, the proceeds from the sale of River Bend will advance research on these and other topics critical to landowners. “I went to the Ag School to get their materials on shovel-ready programs they had in place. Tim really liked this one. Tim saw the opportunity. He had a tax situation where he could do something with this ranch. He really did think it through. In the long run, it’s a real commitment to agriculture, ranches, and the American West,” Brown says.

The program that River Bend will support has multiple missions – teaching, research, and service, including a diagnostic and veterinary service to ranchers – all of which revolve around animal health, and, specifically, disease prevention, a challenge and a threat facing livestock and wildlife throughout the West. 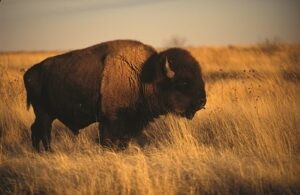 “Our program is unique in its laser focus on large domestic and wild ungulates,” says Dr. Frank Galey, the enthusiastic Dean of the College of Agriculture and Natural Resources. “We’re looking at sheep pneumonia, chronic wasting disease, and brucellosis in wild bison and elk in the Greater Yellowstone Ecosystem that impact cattle. The late Dr. Beth Williams, who was lead pathologist here for many years, discovered chronic wasting disease.”

Chronic wasting disease (CWD) would be the wild equivalent of bovine spongiform encephalitis (BSE), which is better known by its tabloid nickname, mad cow disease. Recent outbreaks of CWD have been found in whitetail deer in many parts of the U.S. A $25-million upgrade at the University of Wyoming has added three high-security laboratories working with bio-safety level diseases such as CWD, BSE, and brucellosis.

“Many of the diseases that occur naturally in Wyoming are considered agents of concern by the Department of Homeland Security,” Galey explains. “We can’t do the research we need to do without this special enclosed space. The State of Wyoming anted up. We were able to hire continental Europe’s leading prion researcher, Dr. Herman Schatz. We brought a Nobel Laureate to the university last year, Kurt Wuthrich. Guys from the military who were working on anthrax vaccines are now here working on brucellosis vaccines. We’ve got an all-star team here. So this place is a real catalyst.”

“We were given the River Bend Ranch by the Mellons with the understanding that we would market the ranch and put the proceeds in an endowment to support another excellence professor, bring in graduate students, and provide laboratory support,” Galey says. “We’re dedicated to doing important research about these diseases and finding solutions.”

The gift, Galey said, is “catalytic, not only from the standpoint of getting research done, but it’s excited my administration so that now they have a major transformative initiative to try and raise more. We’re at the point we have enough critical mass and major expertise to attract major veterinary schools as partners. This gift is part of what attracted them. Not only will this gift bring one more researcher in, it’s likely to bring an entire school full of researchers collaborating with us on these problems.”

Any temptation by UW to hold on to the ranch was tempered by the dozens of ranchers already working with UW as well as extensive access to public lands administrated by the Wyoming Game & Fish Department. Still, the university hopes to maintain a relationship with the new owner. “We’ll keep the buyer involved in our program if they’d like because there’s so many things a private landowner can do to help us,” Galey says.

Of course there are other considerations for the ranch’s next owner. “In addition to furthering the University of Wyoming’s significant research, the new owner of the River Bend Ranch will enjoy a very productive ranch,” Fay says. “The agricultural operation has high-quality facilities and produces a strong hay crop to support the livestock. The current managers and lessees have taken excellent care of the ranch and would be an asset to the ranch going forward.”

With the endowed chair and funding for graduate students, staff, outreach, and education, Galey envisions a 10-year window for developing vaccines to control diseases. “This kind of money changes everything,” Galey acknowledges.

Todd Cornish, Brant Schumaker, and Hermann Schatzel discussed with me how the River Bend endowment will be used to further research. Cornish is the lead pathologist in the labs. Schumaker is an epidemiologist who takes a macro view of these diseases. Schatzel studies the molecular base of what’s happening with the protein that triggers CWD.

“This center builds on existing strengths of this department and this university, working on diseases that are occurring with wildlife, livestock, and companion animals,” Cornish said. “We’ve always worked at an underfunded level. [The sale of the River Bend Ranch] will allow us to work on an ecosystem level, which is where we need to be approaching these problems.”

Schumaker’s expertise is brucellosis, but he’s looking at other diseases as well. “My specialty is looking at all the variables that go into a disease issue and then trying to come up with solutions from the 30,000-foot view,” he explains. “Our population is so tied our resources – our land, our wildlife, our livestock. This is a really important place to put a center like this, one that will be well-received by the public as well as by the university.“

Vaccines are Schatzel’s specialty. They are why he came to Wyoming to study CWD and the protein that causes it. In the Cowboy State, he has access to a critical mass of wildlife that doesn’t exist in Germany.

“The mountain doesn’t come to the prophet, the prophet goes to the mountain. That’s why I’m here,” the Bavarian says. “Chronic wasting disease is the most puzzling, interesting, and challenging prion disease. It’s also the most contagious. And this is the best place to study CWD. We are thinking big in Wyoming. We’ve found some ways to trick the immune system to react with another form of the prion protein. And this can stop prion propagation.”

Cornish gave me a guided tour of the diagnostic labs, which also function as the state veterinary lab. “We are the most over-trained people you’ve ever met in your life. We are CDC-certified, AADLD-certified, and a bunch of other acronyms-certified. All the water used in the labs is run through an on-site water treatment plant. You can’t even take paper from your lab reports out. You fax your papers out,” Cornish says.

He adds that the lab’s location in Wyoming is ideal. “It’s a natural theater for doing wildlife disease research,” he says. “On the other side of the coin, we’re a beef state. The presence of all those ranchers is a buffer against development and loss of open spaces and wild places. It’s always been a natural marriage between livestock and wildlife at this institution.” 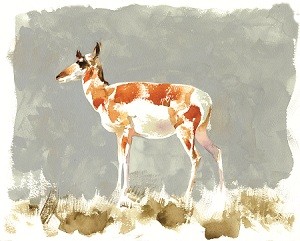 “The next owner of the River Bend Ranch is going to buy a beautiful ranch. But they’re also going to put money behind a program that’s going to be solving problems,” Galey says.

Zimmerman has her own goal for the ranch. “I want the best for River Bend,” she says as her eyes scan the vast landscape. “I want this to be here 100 years from now.”

Thanks to a forward-thinking donation by the Mellon family and the commitment of the current stakeholders, her wish is likely to be granted.