The inherent appeal of BIG SKY COUNTRY is enticing buyers keen on sheltering in some place beautiful. — Corinne Gaffner Garcia Montana is known for wide-open spaces, rugged landscapes, abundant wildlife, and outdoor recreation like you wouldn’t believe: everything from… 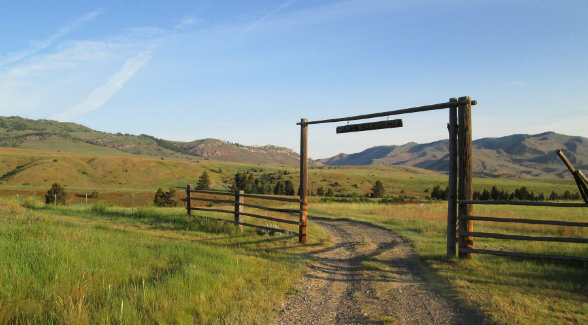 The inherent appeal of BIG SKY COUNTRY is enticing buyers keen on sheltering in some place beautiful. — Corinne Gaffner Garcia

Montana is known for wide-open spaces, rugged landscapes, abundant wildlife, and outdoor recreation like you wouldn’t believe: everything from hunting and hiking to fly fishing and skiing. But it’s also a relatively remote state — tucked up against the Canadian border somewhere between Chicago and Seattle. And although it ranks as the fourth largest state by landmass, just over one million souls call it home.

For all of these reasons, Big Sky Country has long been known among celebrities as a safe spot to escape the bright lights of the big city. In Montana, celebrities and their families can amble through small towns with no fanfare. These elements also appeal to tourists and second homeowners; those who have discovered it, myself included, often report feeling as though they’ve been let in on a big secret.

A not-so-big secret? Montana has become the getaway. When COVID-19 began spreading, those lucky enough to own second homes in Montana sheltered in place in Big Sky Country. And those considering buying land in Montana started pulling the trigger. Fast.

“There is a surge of interest in this area,” says Tracy Raich of Raich Montana Properties in Livingston. “A lot of people from out of state have always thought about buying a place in Montana, but they never did anything about it. Most of these people already have a love for this area. They want a safe haven, a getaway place, and they know that now they’d better do it.”

Coveted locales such as Paradise Valley typically have low inventory. And that was before coronavirus. “People have told us that we don’t have anything on the market,” Raich says. After the pandemic hit, she called a potential seller and recommended listing right away; the $2.6 million property was under contract within weeks.

Tim Murphy of Hall and Hall refers to such properties as “Plan B retreats.” He says that 9/11 was, perhaps, the first event to inspire clients to start searching for a backup.

“Many people that we work with consider having a rural property as a part of their Plan B, a place to head to in the event of some local, national, or international crisis like a pandemic, a natural disaster, or a terror attack here on American soil,” Murphy says.

“A large portion of those people later realize that their Plan B can actually become Plan A. Plan A is in full effect right now for a lot of our clients who are staying at their ranches through these times,” Murphy says.

Fay Ranches has seen a noticeable jump in interest in the short period since the pandemic began. The company’s dollar volume of closed transactions is up 34 percent year-over-year, and website traffic is up 41 percent.

Fay Ranches founder Greg Fay says the unspoiled nature of Montana is a big part of its allure. “There’s a romance with Montana, and I think it started with the movie A River Runs Through It. In Montana, there’s more acreage under conservation easement than in any other state. The valleys are wider, the landscape is more vast, and people feel like they’re not following other people when they come here. Those who go to Aspen want to be social. Those who come to Montana want to get away from it all,” Fay says.

He should know. Fay has owned a ranch in Montana’s Ruby River Valley for 25 years. Although he and his family call Bozeman home, when the shelter-in-place order went into effect, they packed up and moved to the ranch. His wife and kids have asthma, which put them at high risk for COVID-19.

“We’ve had no one else around for six weeks, and the little grocery store in town does curbside pickup. It just feels very safe for my family. The other thing that’s wonderful? To date, I’ve probably caught more big fish than I have in the last five years combined,” Fay says.

Fay feels extremely fortunate that his family has a retreat where they can social distance yet also enjoy the recreational opportunities that Montana has to offer.

“It’s like the rekindling of a romance. After 28 years of running my own business and having kids, we’ve never been at the ranch for that long of a stretch at that time of year,” Fay says.