Playing Politics Dwindling revenues and rising costs are sure to drive legislatures to look at your land as a quick fix for busted budgets. With so much of the economy tied to Washington, it’s easy to overlook the consequences of… 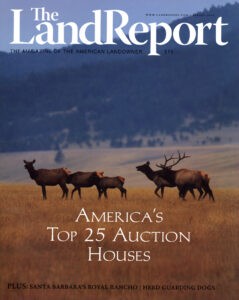 Dwindling revenues and rising costs are sure to drive legislatures to look at your land as a quick fix for busted budgets. With so much of the economy tied to Washington, it’s easy to overlook the consequences of state and local policies.

Remember Kelo? The ominous specter of government taking one citizen’s private property and transferring it to another to further economic development didn’t start on the steps of the U.S. Supreme Court. It only ended there. Property rights advocates want to tar and feather the justices who voted in the majority, but in my mind the culprits in Kelo were the local volunteers at the New London Development Corporation who changed the course of American history by callously disregarding their neighbors’ property rights.

Keep this message in mind as cash-strapped state legislatures search for quick fixes. Nevada has a $787 million deficit. Illinois’s needs $13 billion. And the gold medal goes to … California, which needs some $20 billion to balance its checkbook.

Cost-cutting measures are already in place. What worries me is legislation such as the bill introduced by California Assembly Member Juan Arambula to eliminate the tax advantages of 1031 Exchanges. Critics regard this section of the I.R.S. code as a tax dodge. The hard truth is that a 1031 defers taxes much the same way as gains in your I.R.A. or a 401(k) are deferred.

Furthermore, as brokers from coast to coast can tell you, 1031s are market drivers. By requiring proceeds from a capital gain to be quickly reinvested, they gin additional sales and enhance liquidity. Mr. Arambula’s legislation is not just an ill-founded attempt to generate additional revenues; it is exactly counter to what California needs right now: more business.

My thanks go out to Robert Himsl, The Land Report subscriber who alerted me to Assembly Member Juan Arambula’s legislation. As he put it, “A lot of people think owning land is easy. You just sit on it–right?”

Sit on it and keep your eyes peeled.

If you come across a piece of legislation or a pending court case that could affect landowners or land in general, let know me at editor@landreport.com.

Posted in Back Issues