Big Deal Would you call a working cattle operation set on thousands of acres along the Continental Divide a ranch, or does the term “residence” seem more appropriate? Major transactions like the sale of Colorado’s Boot Jack Ranch a… 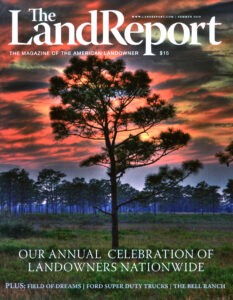 Would you call a working cattle operation set on thousands of acres along the Continental Divide a ranch, or does the term “residence” seem more appropriate?

Major transactions like the sale of Colorado’s Boot Jack Ranch a few months ago always generate a lot of press. When you’re talking about a $46.5 million price tag, it comes with the territory. In addition to LandReport.com, local papers like The Durango Herald, regional dailies including the Denver Post, and of course The Wall Street Journal, whose excellent real estate section follows closings of all shapes and sizes, made mention of the sale of the Boot Jack.

That’s the good news. The bad news is that more than a few of these media outlets were way off base in their descriptions of the Boot Jack. In several instances, the deal for the sprawling 3,151-acre ranch was described as “the most expensive residential transaction in 2010 in the U.S.” Is it just me, or does it come across as a bit of a stretch to compare the Boot Jack, with its priceless water rights at the crest of the Continental Divide, to mega-mansions currently on the market in Palm Beach and Beverly Hills?

There’s only one way the Boot Jack can be considered residential, and that’s by counting the 4,000 trout and 800 head of cattle that swim in its streams and forage in its pastures as native to Archuleta and Mineral counties. A good rule of thumb for identifying residential properties is that they can be found in residential neighborhoods. By comparison, the Boot Jack’s neighbors include the San Juan National Forest, the Weminuche Wilderness, and other private landowners. Sound residential to you?

Thanks to the Boot Jack, we’ve done some research of our own. Turn to page 20, and you’ll find the inaugural version of The Land Report Top Ten. Featuring the nation’s leading land listings, the roster includes working ranches, woody retreats, and a few of the last large parcels found in close proximity to city centers like Manhattan, Los Angeles, and Santa Barbara.