Land to Table – that’s what’s cooking in the Summer issue of The Magazine of the American Landowner. Five amazing landowners are profiled – individuals, couples, and families who are changing the way America eats as they produce Vermont maple sugar,… 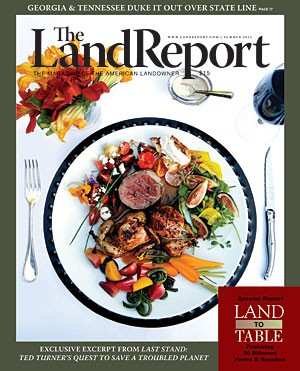 Land to Table – that’s what’s cooking in the Summer issue of The Magazine of the American Landowner.

Of course the show stopper is the legendary entrepreneur who won America’s Cup and created CNN. Ted Turner’s bison herd is the world’s largest. It now numbers over 50,000 head. In this issue, we feature an exclusive excerpt from Todd Wilkinson’s new book, Last Stand, which details Turner’s acquisition of the famed Flying D Ranch and his revitalization of this iconic symbol of the West.

Plus, The Land Report goes behind the scenes with Turner’s partner at Ted’s Montana Grill, George McKerrow.

For more up to the minute reports on listings, auctions, sales, and breaking news pertaining to land and landowners, be sure to follow The Magazine of the American Landowner on Google+, Facebook, Twitter, and Pinterest.