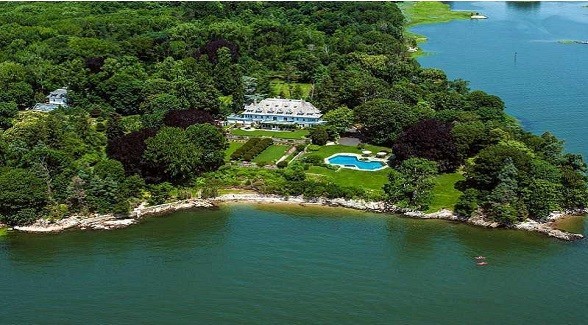 1. NEW! Copper Beech Farm (Connecticut): $130 million
A relic of Old Greenwich, this 50-acre estate (pictured above) is the last of its kind and includes two islands and more than a mile of shorefront. David Ogilvy of David Ogilvy & Associates has the listing. Click here to view the video.

2. Homer’s Pond (Massachusetts): $118 million
This private retreat is set on 314 acres along the southern shore of Martha’s Vineyard. Available in its entirety or in smaller parcels. Grace Bloodwell and Charles Carlson of South Light Property have the listing. Click here to view the video.

3. NEW! Pumpkin Key (Florida): $110 million
This 26-acre island in the Florida Keys sits between Key Largo and the mainland. Improvements include a main residence, two caretaker’s cottages, a dock master’s apartment, and an office. Accommodations and dockage at Ocean Reef transfer. Russell Post of Russell Post Sotheby’s International has the listing .

7. Rancho Dos Pueblos (California): $79 million
This oceanfront parcel is on the market for the first time in three decades. Spanning 2,175 acres just west of Santa Barbara, Rancho Dos Pueblos is one of the largest remaining ranches along the Gaviota Coast. Kerry Mormann & Associates has the listing. Click here to view the video.

9. Walton Ranch (Wyoming): $68.7 million
Set at the foot of the Grand Tetons along the banks of the Snake River, this 1,848-acre working cattle ranch was pieced together by the Waltons starting in 1958. Twenty-five years later, the family placed the ranch under conservation easement. Billy Long and Ron Morris of Ranch Marketing Associates have the listing. Click here to view the video.

10. Rana Creek Ranch (California): $59.95 million
Offered for the first time in 30 years, this 14,000-acre working cattle ranch with its own airstrip sits just 20 minutes from Carmel and 40 minutes from Pebble Beach. Suzanne Perkins of Sotheby’s International Realty Santa Barbara is the listing agent. Click here to view the video.