Deal of the Century: Waggoner Ranch

A Texas landmark with a matchless legacy changes hands for the first time in history. 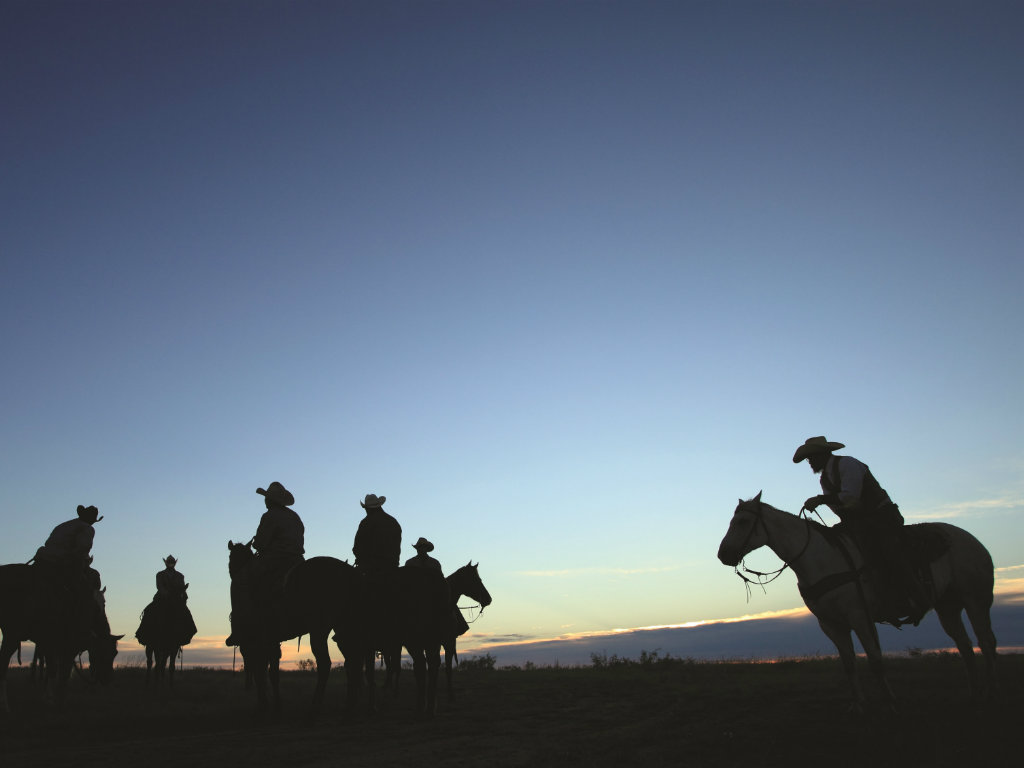 Waggoner Ranch cowboys prepare to ride out at dawn.

It’s one thing to get a chuckle out of the state’s highest elected official. But it’s an entirely different situation when the longest-serving governor in Texas history is laughing at you.

“The chances of the Waggoner selling?” Rick Perry asked me.

The year was 2009, and the two of us were seated in a barren conference room in some nondescript state office building off Congress Avenue a few blocks south of the state capitol.

“To begin with, neither side of the family will talk to the other. That’s strike one. And there’s no set price for the ranch, is there? That’s strike two. But neither of those points matters, not when it comes to Waggoner. We both know who the real decision-maker is, don’t we, Eric?” the governor asked.

It was my turn to smile.

Most people following the fate of the Waggoner focused their attention on its colossal size – over a half million acres –or its Texas-sized attributes: more than a thousand oil wells, tens of thousands of cattle and horses, and enough history and colorful characters to make a movie. But not Rick Perry. I have no doubt that this only son of a longtime Haskell County commissioner could identify the power behind the throne in each and every one of Texas’s 254 counties, and that would include Wilbarger County.

I nodded in agreement.

Tom Waggoner (1852–1934) was to the Old West what Steve Jobs was to Silicon Valley. He endured the before, and he created the after. In 1869, Tom’s father, Dan, entrusted his son with $12. Then he put him in charge of a crew of cowboys. Tom’s task? To drive 5,000 steers more than 400 miles from his father’s ranch in North Texas to market in Abilene, Kansas.

Let that percolate for a moment. 1869 was seven years before Custer’s Last Stand. P.S. The Waggoner boy and his crew couldn’t trail their herd across Oklahoma. Why not? Because Oklahoma didn’t exist. Much of what is now Oklahoma was at that time known as the Indian Territory, home of the Comanche, the Apache, the Cheyenne, and Kiowa reservations. Is this the sort of chore you would give your 17-year-old?

But Tom Waggoner did more than do his chore. He returned from Kansas with $55,000 in his saddlebags. Take a moment and pencil those numbers: $12 in; $55,000 out. That type of return created the largest ranch behind one fence in Texas. And while it was being created, Tom witnessed the end of the Old West. A good example would be the deal the Waggoners cut with the Comanche chief Quanah Parker to lease an enormous swath of the Indian Territory called the Big Pasture. Congress had set aside this open range for the benefit of Native Americans, not Texas ranchers. As the pressure built to nix the lease, the Texans held tight. They even had Quanah invite Teddy Roosevelt out to the Big Pasture to go wolf hunting. It may well have been the highlight of T.R.’s second term, but that didn’t matter.

Losing the Big Pasture lease was a rare setback for Tom Waggoner. Another challenge that stymied him was what to do with his ranch. He had been his father’s only heir. Unlike Dan, however, Tom had multiple heirs. In 1909, he divided the ranch into four parts. The largest he kept for himself. The three smaller ranches he parceled off to Electra, E. Paul, and Guy.

Maybe it was Electra’s million-dollar shopping sprees. Or Guy’s eight marriages. But in 1923, Tom took control of all four ranches and put them under the control of a single trustee: himself. The W.T. Waggoner Estate Ranch had become a Massachusetts business trust. Which is why Governor Perry was spot-on with his first point. When the equal beneficiaries of such a trust disagree, nothing much can get accomplished.

As the 20th century drew to a close, the unwieldy nature of the Byzantine trust manifested itself. Guy’s two children were no longer shareholders; after their father’s death, they had sold their interests to their cousins. That left the heirs of Electra and E. Paul, and by the early 1990s, they were in court.
The ins and outs of the complicated case would require a special issue of The Land Report, but in essence, the two sides were battling over whether or not to sell the ranch. And if there were a sale, at what price? And if one side of the family chose to remain on the ranch and not to sell its interest, which side that would that be?

Neither contingent spoke to the other. This was especially uncomfortable for Electra’s grandson, A.B. “Buck” Wharton Jr., and Gene Willingham, who married E. Paul’s granddaughter, Helen Biggs. Although the two officed across the hall from one other in the W.T. Waggoner Estate Building, their principal means of communication was written memos.

An avalanche of suits and countersuits literally went nowhere. They stayed put in the 46th Judicial District Court, where Judge Tom Neely and, subsequently, Judge Dan Mike Bird presided. To oversee the estate, Wilson Friberg was designated as court-appointed receiver.

All the while, wealthy suitors journeyed to Vernon from across Texas and around the country to court the family. Media moguls, oil barons, millionaires, billionaires — none had any luck buying the ranch. Per Rick Perry, the contentious heirs and the nebulous price precluded a sale.

Ultimately, a brutal scenario emerged: the Waggoner would go to auction. Sell off all 510,527 acres in parcels. Or give a single bidder the opportunity to acquire it in its entirety. The mineral estate would also be severed and sold to the highest bidder. So would the permanent improvements, rolling stock, ranch equipment, oilfield equipment, cattle inventory, horse inventory, and horse facilities. The W.T. Waggoner Estate Building in Vernon would go. So too would the Waggoner’s historic 3Ds brand.

A new court-appointed receiver had been designated, and to Mike Baskerville, auctioning the Waggoner wasn’t the best option. It was the only option. Tearing apart the great ranch piece by piece was the sole approach to achieve Rick Perry’s most elusive condition: court approval.

Baskerville had already retained veteran Texas ranch broker Sam Middleton of Chas. S. Middleton & Son in Lubbock to consult on essential documents such as a survey and a title policy. But when Middleton learned that an auction was in the works, he dissented.

“I told Mike, ‘That’s the worst thing you can do: cut it up. It’s going to lose its identity by doing that,’” the Texan told me. Middleton wasn’t the only one thinking along those lines.

On November 13, 2013, a hearing was scheduled in Judge Dan Mike Bird’s court. Its purpose was to approve the selection of a trio of companies to oversee the Waggoner Ranch auction. They never got the chance.

Like Middleton, Uechtritz believed auctioning the ranch to be a catastrophe. The two had first met at the 2012 Land Report Summit at the Mesa Vista Ranch [see The Land Report, Fall 2012]. By the morning of the hearing, Uechtritz had presented the families and their attorneys with a type of offer called a stalking horse bid for $550 million. The result? For the first time in decades, the two warring factions came to an agreement: to oppose the auction.

Eight months later, the family was ready to move forward on its own terms. The Waggoner Ranch would be sold, but only to a single buyer. Uechtritz and Middleton would be co-listing agents. And the price? The princely sum of $725 million.

On Aug. 6, 2014, it was announced that Judge Bird had signed off on the marketing plan. News of the 800-square-mile listing of the Waggoner Ranch ricocheted around the world. Thanks to a global marketing campaign, inquiries began pouring in from more than 130 countries, including India, China, and Australia.

Says Middleton, “We showed the ranch to somewhere between 10 and 15 individuals or groups from foreign countries.”

At the Herring Coffee Shop in downtown Vernon, the arrival of each private jet at the Wilbarger County Airport fueled endless speculation. Any means was fair game to determine a prospect’s identity, including Googling a jet’s tail numbers. This worked with almost every prospective buyer, but it didn’t work with Joel Leadbetter’s client.

For well over a decade, the Montana broker had kept a watchful eye on the great Texas ranch. Years had passed since his initial contact with the heirs and then Wilson Friberg, the estate’s first court-appointed receiver. But the timing wasn’t right. So the Hall and Hall broker waited. And he watched. In 2011, Baskerville replaced Friberg. Leadbetter kept watching. Three years later, when Bird signed off on the marketing plan, Leadbetter made his move.

“When the ranch got listed, my first phone call was to Sam Middleton,” Leadbetter says. “I said, ‘Sam, you and I both have been down this road with this ranch. I think you guys are wasting your time.’ And Sam said, ‘Joel, I would tell you if I thought we were, but I really believe the stars are aligned. This deal’s going to happen.’”

Based on Middleton’s assessment, Leadbetter called his client: Stan Kroenke.

Readers of The Land Report know Kroenke for his ownership of legacy ranches such as British Columbia’s Douglas Lake Ranch, Wyoming’s Q Creek, and Montana’s Broken O. The acquisition of the Broken O by Kroenke Ranches from the heirs of Bill and Desiree Moore was selected by the Magazine of the American Landowner as the 2012 Deal of the Year [see The Land Report, Spring 2013].

On each of those transactions, Kroenke had relied on Leadbetter’s counsel and the insights of Sam Connolly, general manager of Kroenke Ranches. Together the three are an effective team. Leadbetter demonstrated his savvy by not wasting Kroenke’s time discussing the ranch during the previous decade.

“‘Stan,’ I said, ‘I talked to Sam Middleton. This thing is on the market, and he thinks the timing is right.’” “‘Well, let’s go ahead and get registered,’ Stan told me.”
So began a stealth operation that would last more than a year. In April 2015, Middleton and Uechtritz flew to Denver to meet with Kroenke, Connolly, Leadbetter, and Mike Hall of Hall and Hall. Few knew that Kroenke got his first look at the great ranch the very next month. The cat-and-mouse game that the locals had been playing didn’t work with Kroenke and his team. Instead of flying into Vernon, they landed some 60 miles east in Wichita Falls. No one at the Herring Coffee Shop would be the wiser.

For Uechtritz and Middleton, the next six months were a whirlwind of conference calls, meetings, and trips to Vernon.
“Stan’s in-house advance team worked long and hard on this deal under the radar for nine months at least before Stan was revealed at the last minute,” Uechtritz says. Still wary of spooking the deal, he had a colleague, Will Beuck, facilitate due diligence by setting up a data room not in Vernon but in Dallas at the Ritz-Carlton.

In September 2015, six parties presented $15 million earnest money deposits. The following month, four finalists were invited to Fort Worth to meet the heirs and present their vision for the next chapter in the history of the Waggoner Ranch.

The Land Report Deal of the Century: Waggoner Ranch in Texas

It’s HERE! The Winter issue of the Magazine of the American Landowner featuring the 2015 …

Nestled into the pastoral Woody Creek, Flying Dog Ranch is one of the last remaining …