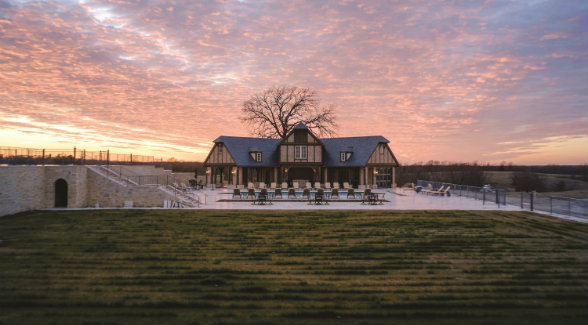 The pool house immediately adjacent to the lodge rates as one of the best venues for enjoying spectacular sunsets.

Set high above two forks of a Texas river, this masterfully planned 14,000-acre retreat features world-class waterfowl and upland bird hunting as well as fly-fishing, sporting clays, and other shooting sports. Rich wetlands, cultivated fields, and expertly managed pastures evince a devotion to the best traditions of sport and agriculture. It even boasts its own vineyard. The seasoned staff at the 65,000-square-foot limestone lodge welcomes the weary with creature comforts, superb service, and the finest fare.

In 2005, Steve Hageman, founder and chairman of the board of Indianapolis-based Hageman Group, set his sights on acquiring top-tier farmland in the Lone Star State. The land was attractively priced and in some cases the quality exceptional. One tract caught his eye: a 14,000-acre parcel at the confluence of the North and South Forks of the Sulphur River near the small town of Sulphur Bluff. From an agricultural standpoint, the property had it all: rich blackland soil, lush pastures, abundant post oak mottes, a mixture of gentle hills and bottomland, abundant surface water, and proximity to Dallas. Previous owners included a European prince as well as a series of agricultural investors. The Midwest native immediately recognized the potential. 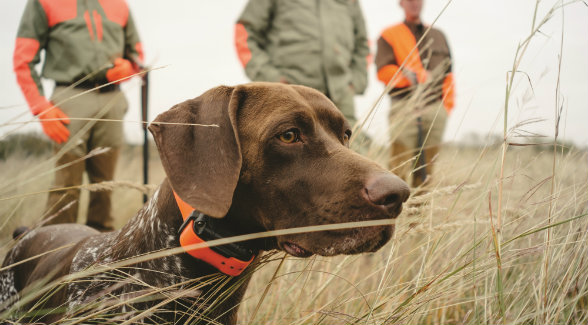 No one takes their work as seriously as the residents of the kennel. Guests often bring their own dogs.

Hageman’s son-in-law, Shad Schenck, a pro angler, recognized something else: incredible wildlife habitat. The same ecological richness that powered the property’s agricultural potential also lured tens of thousands of ducks from the central flyway every winter. That also meant the presence of the requisite bottomland fertility needed to nurture largemouth bass in lakes and ponds. Oak mottes dotted long stretches of grassland and created miles of high-quality habitat and cover critical to countless species such as whitetails. With proper planning and long-term management, the surrounding uplands could become prime habitat for game birds such as bobwhite quail and pheasant. Thus, a unique hunting and nature reserve was born. 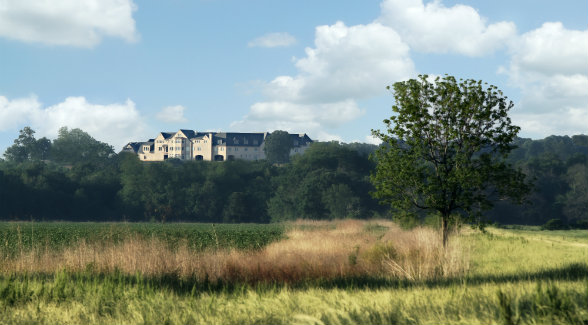 The lodge, made of Texas limestone and roofed in slate, is perched atop the highest point in Hopkins County.

First, the water. Thanks to 22,000 acre-feet of surface water, three reservoirs were stocked with largemouth bass. Smaller ponds were designed with fly-fishing in mind. Although the Sulphur River watershed provided superb waterfowl habitat, Hageman brought Shane Roethle on board. A wildlife biologist with a track record in Stuttgart, Arkansas, Roethle developed a program to optimize the mix of marshland plants for waterfowl.

Today, flooded corn, rice, and soybean fields and a green-tree reservoir draw in ducks by the thousands. To promote natural regeneration of smartweed and millet, the system draws down selected wetlands, thus exposing the soil to sunlight. This stimulates plant growth. These areas are then reflooded, creating ideal waterfowl habitat.

Next, the uplands. Most Indiana farmers, including Hageman, know a thing or two about pheasant and quail habitat. The vast patchwork of cultivated fields and natural cover at The Reserve creates ideal habitat for upland game birds – and hunters. Before they get out in the field, most shooters like to limber up and sharpen their shooting eye. So Hageman built a shooting complex complete with pistol and rifle range, trap and skeet field, a 12-station sporting clays course, and a crazy quail bunker. 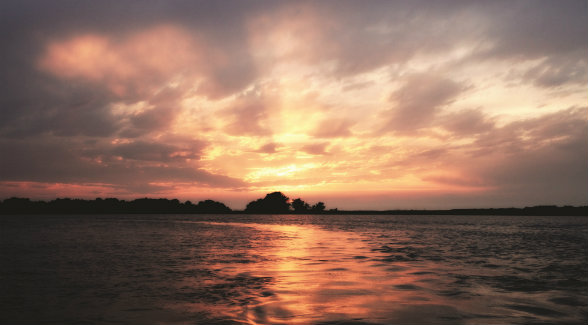 Thanks to its strategic location on the Sulphur River, The Reserve boasts three reservoirs with more than 22,000 acre-feet of water.

The Hageman family envisioned a lodge with half a dozen guest rooms, but thinking small is not the way the family fortune was made. Hageman thought 30 rooms seemed about right. The family got on board, and from there on, the vision grew into a classic.

For the building site, Hageman selected the highest point in Hopkins County. He had the lodge made with Texas limestone, roofed in slate, and floored in the post oak cleared from the property. In addition to 28 guest suites, the lodge features a 5-bedroom, 5½-bath owner’s suite, a 3-bedroom, 3½-bath presidential suite, and a 2-bedroom, 2-bath founder’s suite. A geothermal system heats and cools the structure. Those needing to take a break from the field can avail themselves of a giant swimming pool just a few steps away. The pool house is also a favorite setting on game days. In addition, a 4-bedroom, 4-bath lake house and a 6,400-square-foot range house are also available. To enhance the Old World feel, a vineyard and orchard were planted.

In 2014, Hageman Reserve opened as a members-only club. Almost immediately, glowing reviews appeared in high-end sporting publications. Two years into the project, The Reserve had approximately 60 members and an ever-increasing waiting list. It was Steve Hageman’s hope that one or more of his children would take charge and run the family’s Texas venture, but the close-knit clan, Hoosiers to the bone, realized its future lay back home in and around Indianapolis. In July 2016, the Hagemans decided to put The Reserve on the market.

Steve Hageman planned his reserve for a special membership. Likewise, the property will attract a special kind of buyer, and whoever that is will soon see that The Reserve is in pristine condition. 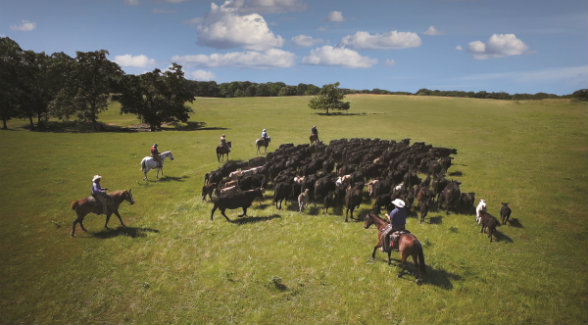 After more than a decade of ownership, The Reserve enjoys a proven cadre of hands.