Text and photography by LYNN DONALDSON Russell Gordy is my neighbor. Let me rephrase that. Russell Gordy’s 48,000-acre Double Arrow Ranch sits just outside Livingston, the Montana town where my family and I live. Russell is a Texan, a native… 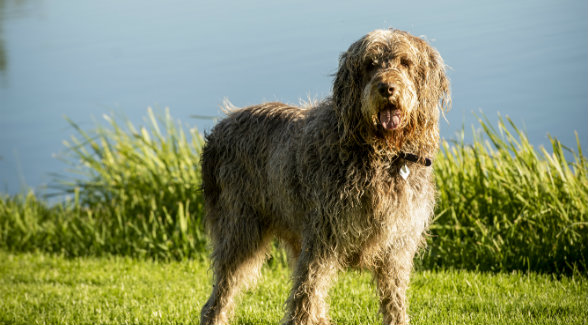 NOT A WATER DOG | When Garrett Gordy asked his father to babysit Pony, he told him she didn’t like water and wasn’t much of a swimmer.

Text and photography by LYNN DONALDSON

Russell Gordy is my neighbor. Let me rephrase that. Russell Gordy’s 48,000-acre Double Arrow Ranch sits just outside Livingston, the Montana town where my family and I live. Russell is a Texan, a native Houstonian, and he and his wife, Glenda, love to escape the heat and spend their summer on the Double Arrow with a passel of grandkids and a very special Italian Spinone called Pony who actually belongs to Russell’s son Garrett.

Pony’s full name is Paonia, but if you start to get into particulars, you’ll miss the whole point of the story. Italian Spinones are hunting dogs. They track. They point. They retrieve. This one? She likes to fish. 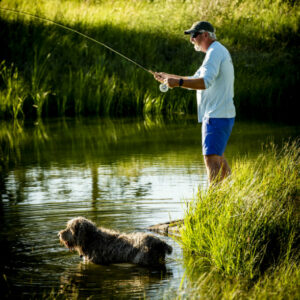 PLAYING IT COOL | Pony chills in the shallows.

Here’s how it goes. First, Russell preps the pond by throwing a couple of handfuls of fish food into the water. Pony waits patiently by his side. As soon as the fish food hits the water, the trout begin to feed. This is not a silent endeavor. The pond literally explodes into a cauldron of tiny, noisy ripples. We have just passed the point of no return. Pony can’t contain herself and throws herself headlong into the water. As soon as she belly flops, the 8-year-old immediately wants to be everywhere at once. Fish are in front of her. Fish are behind her. Fish are beside her. The more I watched, the more I was sure that those trout must be messing with her. As I circled the edge of the pond taking shots from different angles, I kept thinking that I was going to get a Thomas Mangelsen-like image: Pony with her mouth wide open and a rainbow sailing in.

One of Pony’s favorite maneuvers is to scoot in close to the bank where she can actually stand and then try to swat one of the trout in the shallow water with her paw. I was half expecting her to grab one with her teeth. No such luck.

Pony is not a small dog. I found myself growing anxious as I watched her swim so aggressively. She swam and swam and chased and chased, but never once did she tire or come to shore. Two or three times, Russell tried to coax her into taking a break. They were the only instances when she didn’t mind her master. I was too busy laughing, and so was Russell. How does the poor girl see with all that wet hair hanging over her eyes? It doesn’t look possible. It made me so happy to see this beautiful goofball having that much fun. Russell is incredibly patient with her and obviously enjoys watching her have such a good time. 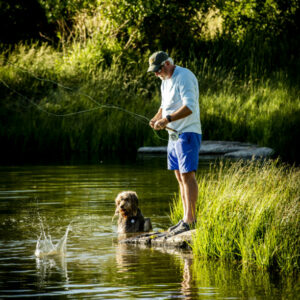 Russell and Pony worked all three ponds by the main lodge, which was designed by Locati Architects and built in 2014. At the final pond, Russell made Pony stay out of the water until he hooked a fish. You could tell the dog desperately wanted to be in the water, but she was such a good girl. As soon as Russell set the hook, the fish began darting in every direction. Pony did the same thing — but on the shore. As Russell reeled in the cutthroat, Pony grew incredibly still and focused. What was more amazing was how gentle she was. A lot of dogs that I’ve been around would have gone berserk and caused the fish to get away as it was brought in. Not Pony. Intense? Yes. But she wasn’t at all aggressive. In fact, she was really gentle. When it came time for Russell to release the fish, Pony let it swim away without a second thought. Clearly, the chase is where the action is for this girl.

For the rest of the day, the two buddies worked the still water side by side. Russell chatted with Pony and described which fish he was going to land and how he was going to do it. Pony alternated between watching the water and glancing at his pal. Those two really know how to have a good time together.