Mack Louden’s most memorable feature isn’t his sunbaked skin or his steely eyes. It’s his determination. The man’s face is optimistically defiant, unbroken yet scarred, and colored by a tinge of melancholy and pessimism. More than a century ago, his… 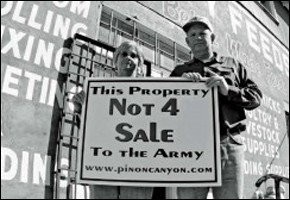 Mack Louden’s most memorable feature isn’t his sunbaked skin or his steely eyes. It’s his determination. The man’s face is optimistically defiant, unbroken yet scarred, and colored by a tinge of melancholy and pessimism.

More than a century ago, his type settled the Great Plains. In the decades since, they have gone off to war and then returned home to run family-owned ranches. Now Louden and many other Coloradans are engaged in another protracted struggle as they oppose the US Army’s planned 420,000-acre land grab in southeast Colorado.

“The people are losing the government,” he says. “The Pentagon is going ahead with their plans despite all the studies they’re supposed to be doing. It affects everyone in this region, and they’re not even following their own rules.”

Louden’s face and hands show the wear and leathering of a lifetime of ranch work. He walks with his head high, and he looks you square in the eye when he talks to you. A man with more years behind than ahead, he still has the fierceness of spirit of men half his age. So this is a man who doesn’t give up once he sets his mind to a task, and yet on an August afternoon, he’s finishing out the scutwork of closing his feed store in Trinidad about an hour away from his 30,000-acre ranch. He couldn’t run the store, look after his herds of Red Angus, and continue his battle against the Army’s eminent domain plans. The fight alone takes 50 hours a week. Something had to give, and the feed store went first.

“When it comes down to it, this is what’s important,” he says, sitting upstairs in the feed store. The bulk of the inventory downstairs has already been cleared. He spits a little Copenhagen into a cup as if to put an underline on it. “It’s driving my wife crazy how much of my time this has taken, but no matter what it costs me I’d fight it again if I had the chance.”

But Louden is not alone. In recent years, the movement opposing the Army’s planned expansion of the Pinon Canyon Maneuver Site (PCMS) has grown stronger. It’s a broad coalition of ranchers, archaeologists, paleontologists, tribal leaders, and business owners who oppose the expansion, but the ranchers are far and away the backbone of this domestic insurgency. (The current PCMS is 245,000 acres along and around the Purgatoire River. It was taken or purchased — after eminent domain proceedings — in September 1983 at a cost of about $26 million plus $2 million for relocating some ranchers and their  families.)

While the opposition is strong, political support in Denver and Washington is actually weak. Initially, Colorado’s two U.S. Senators — Republican Wayne Allard and Democrat Ken Salazar — gave lip service to the ranchers. Now both have backed off, offering lukewarm support at best. Only US Rep. Marilyn Musgrave (R-Colorado) has been a staunch ally.

Louden and the rest of the ranchers are using every avenue they can. They’ve even employed the government’s own environmental and preservation laws to stymie the Defense Department’s plans. And opponents are also looking into what they say are suspicious connections between military contractors, Pentagon brass, Colorado senators, and some powerful interests in the state’s capitol.

Louden has already proven he’s willing to make this, his last fight, one he carries to the end. “We’ve already pledged it — not one more acre,” he says.