Supreme Court votes unanimously to protect Idaho family’s property rights. When Michael and Chantell Sackett bought a half-acre lot near Priest Lake, Idaho, they planned to build a home. The Sacketts applied for and received the requisite building permit and… 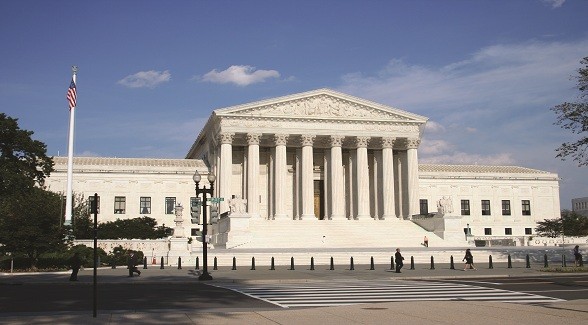 When Michael and Chantell Sackett bought a half-acre lot near Priest Lake, Idaho, they planned to build a home. The Sacketts applied for and received the requisite building permit and began construction. Then they heard from the Environmental Protection Agency (EPA). The agency demanded the Sacketts call off construction. Why? Because their half-acre parcel was a “wetland.”

To make matters worse, the EPA issued an administrative compliance order that offered two options. If the Sacketts complied with the order, they would have to restore their land to the condition it was in before construction began and then apply for a wetlands development permit from the Army Corps of Engineers. The cost to comply? Tens or possibly hundreds of thousands of dollars. Or the Sacketts could ignore the order, face criminal charges, and be subject to fines of up to $75,000 a day.

From the Sacketts’ point of view, the problem was more fundamental their limited number of choices: they had no reason to think their property was a wetland. Rather, they had every reason to believe the EPA was attempting to control their property in violation of the Clean Water Act, which gives the agency jurisdiction only over properties that have a connection to “waters of the United States.” So they took the EPA to court. On March 21, the Supreme Court unanimously ruled for the Sacketts in their David versus Goliath struggle to defend their property rights. In doing so, the justices reversed two lower courts that had abdicated any judicial review over the EPA’s attempt to control development on the Sacketts’ modest parcel. Furthermore, Sackett v. Environmental Protection Agency put in place an important precedent for anyone who cares about property rights and curtailing runaway bureaucracies.

First, the backstory. The Sacketts’ lot is separated from Priest Lake by a road and is surrounded by other lots, some with existing homes. An engineer they hired to assess the property assured them that it was not a wetland. With that in mind, the Sacketts believed that the EPA had no authority at all to issue the draconian order, so they requested a hearing to challenge the EPA’s jurisdiction. The agency denied them the opportunity. The government’s position was that only after the Sacketts complied with the order, or were sued by the agency for violating it, could the property owners challenge the agency’s jurisdiction – a position Supreme Court Justice Samuel Alito ultimately described as putting “the property rights of ordinary Americans entirely at the mercy of EPA employees.”

Had the Sacketts abandoned their plans – or suffered the cost of a wetlands permit – that might have been the end of the matter. However, their cause was taken up by the Pacific Legal Foundation (PLF), a public interest law firm that specializes in the defense of property rights. With PLF’s help, the Sacketts challenged the EPA’s jurisdiction in federal court. They claimed that the Administrative Procedures Act (APA) required judicial review of the EPA’s compliance order and, if it did not, then the order violated the Constitution’s Fifth Amendment guarantee of due process. To the Sacketts’ shock, the District Court dismissed the case. The U.S. Court of Appeals upheld the dismissal. After almost six years, the Sacketts were vindicated this spring when the Supreme Court unanimously reversed both lower court decisions. In reviewing the struggle, Justice Alito commented during the Supreme Court oral argument that “most ordinary homeowners would say this kind of thing can’t happen in the United States.”

The Supreme Court made clear in Sackett what should have been obvious all along: when the government sends you an order that deprives you of a property right and requires you to act at substantial expense on pain of suffering a lawsuit, potential fines, and/or criminal charges, it is interfering with your rights and you are entitled to have that order reviewed by a court.

The decision in Sackett assures property owners the right to have EPA administrative compliance orders reviewed by federal courts. It also admonished the agency for its overreaching attempts to expand its jurisdiction without regard to the rights of property owners – and pointedly suggested that Congress review the Clean Water Act to clarify the agency’s limits. “There is no reason to think that the Clean Water Act was uniquely designed to enable the strong-arming of regulated parties into ‘voluntary compliance’ without the opportunity for judicial review – even judicial review of the question of whether the regulated party is within the EPA’s jurisdiction,” wrote the Court.

Unfortunately, the Sacketts’ story is not uncommon. Today, government exerts enormous control over private property, limiting or prohibiting productive and even ordinary use of small parcels and large estates. The EPA and other agencies have a history of using poorly written statutes and the possibility of astronomical fines to expand their jurisdiction and bully property owners into doing what they want with no meaningful opportunity for judicial review. As Justice Alito concluded in a concurring opinion, “[i]n a nation that values due process, not to mention private property, such treatment is unthinkable.” The Sacketts were only rescued from their nightmare when the Supreme Court overturned the judicial abdication of the lower courts for real judicial engagement: a careful review of the facts and the law rather than a rubber-stamping of EPA actions. The resulting decision gives property owners at least a chance to contest the EPA’s jurisdiction when it issues ruinous orders without a basis in law. The ruling is certainly welcome, but nonetheless limited. The Court grounded that right not in the Constitution but in the APA – a statute that Congress can modify at any time. It is left to a future case to decide whether property owners will have a full Constitutional right to due process where their property rights are not fully protected by the APA.

Larry Salzman is an attorney with the Institute for Justice, a libertarian public interest law firm. The Institute filed a friend-of-the-court brief in the Sackett case in support of the Sacketts.