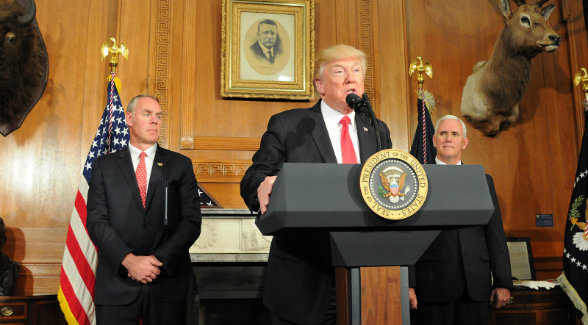 Secretary of Interior to vet designations since 1996.

President Donald Trump directed Secretary of the Interior Ryan Zinke to review national monuments greater than 100,000 acres created by the Antiquities Act since January 1, 1996. The Antiquities Act Executive Order, which was issued on April 26, covers national monuments designated by Presidents Bill Clinton, George W. Bush, and Barack Obama. Per the order, Secretary Zinke will consult with local governments and tribes and report back on suggested legislative or executive action, if applicable, within 120 days. The Antiquities Act of 1906 authorizes the president to declare federal lands of historic or scientific value to be national monuments by designating the “smallest area compatible with proper care and management of the objects to be protected.” In his remarks, Secretary Zinke said, “The Interior is the steward of America’s public lands. Part of being a good steward is being a good neighbor and being a good listener. In the Trump Administration, we listen, and then we act.”