Yellowstone Club: Wilderness Ranches With All the Bells & Whistles

After spending eight years living and working in Russia with his family, Loren Bough and his wife knew they wanted their kids to grow up on a ranch in Montana instead of in a faraway land. Text by Corinne Garcia… 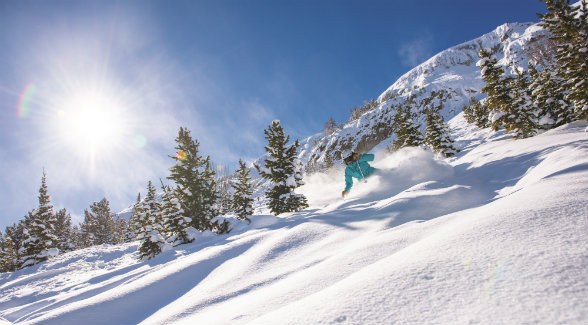 After spending eight years living and working in Russia with his family, Loren Bough and his wife knew they wanted their kids to grow up on a ranch in Montana instead of in a faraway land.

As a fifth-generation Montanan who was raised in a farming and ranching family in a small town near Great Falls, Bough knew all about traditional ranch life. But when he moved back to the Treasure State, he followed a different path. Instead of buying rural ranchland, he bought a 160-acre ranch lot in the Yellowstone Club, a private community in Big Sky, Montana. 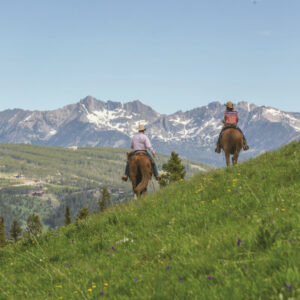 “A lot of people buy ranches and don’t realize they’re going to be hours away from amenities,” Bough says. “Here, we can have privacy – we have 5,500 acres of the Lee Metcalf Wilderness in our backyard. It feels wilder than Yellowstone National Park, with fewer people, but it’s just 10 minutes away from world-class dining and skiing.’’

There are seven Yellowstone Club ranches currently on the market, ranging in size from 160 to 360 acres, and in price from $9.75 to $25 million. Only one of the properties has any structures. They are blank slates for families looking to customize a luxury legacy property.

“It’s unusual in the aspect that the other opportunities at Yellowstone Club are smaller,” Bough says. “This way you can build an entire compound, seven to eight structures, up to 24 bedrooms, for many generations, and they are eligible for multiple memberships.”

To many people, the thought of owning a Montana ranch represents the polar opposite – total independence, autonomy, a rugged way of life – this is a place where you can have those aspects as well as the makings of a luxury vacation at your fingertips. For some, it’s the best of both worlds.

After you’ve cleared the security gates to the Yellowstone Club, a winding mountain road takes you onto the grounds. It’s hard not to be distracted by the scenery: timbered hills and towering peaks in almost every direction. Homes start popping up here and there, some settled into ridgetops, others perched slopeside among tall pine trees. Straight ahead you can make out ski runs cut into the side of Pioneer Mountain, with the Helmet and Sphinx Mountains jutting into the sky farther back. As you come around the last bend – poof – a bustling little village appears out of nowhere. 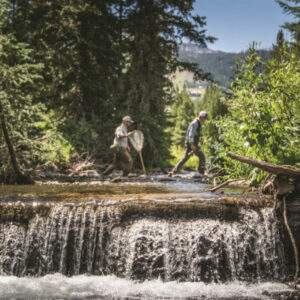 THE GREAT OUTDOORS. Ranch owners at the Yellowstone Club can select from a myriad of adventures on their land, at the club, and at renowned destinations including Yellowstone National Park just minutes away. [Photo Credit: Tony Denim Photography]

But first it’s important to understand the Yellowstone Club itself – what it is, and where it’s going.The 140,000-square-foot Warren Miller Lodge – named after the legendary filmmaker who was a member of the club since its inception in 1997 – anchors the village, a ski lodge in the winter, and a base camp for outdoor activities during the summer months, with dining and lounge areas, fireplaces to snuggle up to, and even shopping. Built in 2007, the lodge was the first element of the infrastructure, a landmark representing the permanence of this private club. Today, it’s surrounded by fenced -off scaffolded buildings, with newly placed siding and the wood and steel frames of new structures being erected to keep up with the demand for residences.

The 15,200-acre Yellowstone Club was created around a seemingly simple idea: private powder. It would be a private ski area that was a haven for those who enjoyed the sport but didn’t like the hype and the hustle-and-bustle of more established venues like Aspen and Vail.

In fact, the Yellowstone Club was described by The New York Times as the “anti-Aspen.” Tucked away in a breathtaking corner of the Northern Rockies, owners could escape their high-octane careers and their Who’s Who social lives to enjoy the good life: the nation’s largest private ski mountain in winter and an outdoor mecca in summer featuring an 18-hole Tom Weiskopf-designed golf course, horseback riding, trapshooting, miles of mountain biking trails, kids camps, fly fishing in Yellowstone National Park, and more. 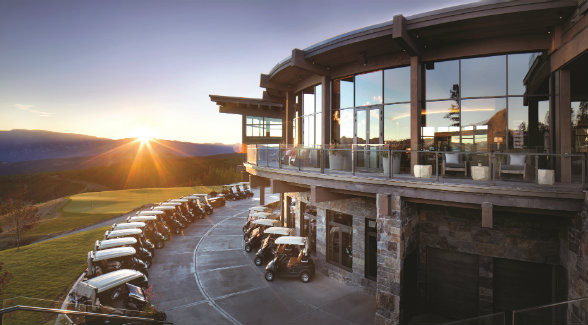 NEXT LEVEL AMENITIES. Whether it be lounging at the new golf course clubhouse (above) or dining at the Rainbow Lodge, members enjoy world-class service in a rugged setting. [Photo Credit: Gibeon Photography]

Although it endured some initial growing pains, including highly publicized bankruptcy proceedings, the Yellowstone Club ultimately created its own niche, thanks in large measure to Boston-based CrossHarbor Capital Partners. CrossHarbor’s cofounder, Sam Byrne, was a club member when the club ran aground during the Great Recession. In 2009, his firm paid $115 million for the assets and pledged another $100 million for capital improvements. Unlike many opportunistic investors, Byrne was as committed to the club’s members and creditors as he was to his own investors. The results speak for themselves. Today, the club is thriving with nearly 700 member families and only 20 percent of its memberships remaining to sell.

Building For the Future

During the planning stages, diversity was a key consideration. Thanks to the ranch parcels and two- to three-acre lots, new members built custom homes of their choice. “There are no cookie-cutter homes here,” says Dave Kisko of Yellowstone Club Realty. “People want to build their own nests. It’s become a very streamlined process.” 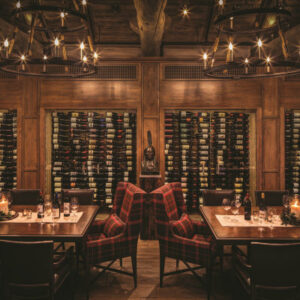 More recently, buyer preference has led to the addition of more condominium units. According to director of sales Bill Collins, the immense amount of current construction is designed to fulfill the requests of members and the inventory needs of potential members.

“The good news is that much of our construction will be done by the end of the year,” Collins tells me. “We’re doing what the members and buyers said they wanted, and people are pretty understanding. Ultimately, they are getting the facilities that will make a great place even better.”

The new village core amenities will be centered around three new buildings being built near the Warren Miller Lodge and the base of the ski mountain. They will include ski lockers, a spa and fitness area, a market, underground parking, and two new restaurants. In addition to these community improvements, an additional 48 residential units with various floor plans and sizes are going up.

“When we decided to add product, we introduced the nucleus village because many young families were looking to be in close [to the facilities] while older families were moving farther out,” says Kisko. 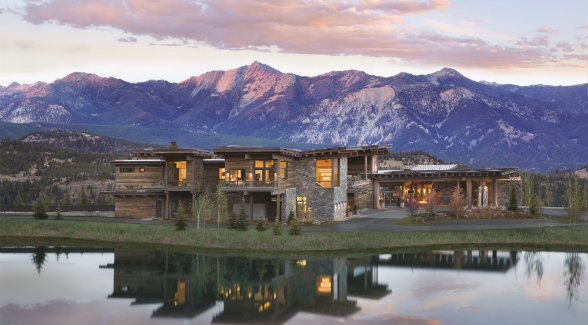 Ranch owners and single-family homeowners can always enjoy their quiet havens away from the heart of the village. On the other hand, they always have the opportunity to be part of the Yellowstone Club community in any way they see fit, whether it be using the lodge facilities and dining areas, attending one of the summer barbecues, or enjoying the club’s New Year’s Eve party.

“There are people who come here and just want the privacy. That’s what the ranch offers,” says Bough. “Skiing was the main attraction for us, and since that time, we’ve also met a great group of amazing people who have become friends over the years. My kids have friends all over the country.”

As I grab breakfast in the Warren Miller Lodge one bright summer morning, people flow in and out. There’s a casual vibe, an easygoing, informal air. Some are dressed to go fishing or hiking in Yellowstone National Park. For others, it’s a day at the pool.

Heck, maybe even buy a ranch here. But is it really a ranch? Clearly, we’re not talking about traditional working ranches. There’s no livestock grazing or hay growing.

Fay Ranches’ founder Greg Fay gives me a great take on the club. Based in Bozeman, Fay Ranches built its reputation by specializing in recreational ranch properties throughout the Northern Rockies. Fay tells me that Yellowstone Club properties can be a great complement to those who also want a more traditional ranch experience.

“Some of our clients who have bought remote ranches from us also want a higher amenity product with access to great restaurants and world-class skiing offered by the Yellowstone Club,” he says. “We’ve sold several properties in the club, and they have clients that look over the hedge and want something in addition to their Yellowstone Club property, something more like a working or sporting ranch.”

Fay Ranches markets larger properties that average around 2,500 acres; they also tend to be more remotely situated. “Their product is distinctly different than ours. Our product is more of an adventure. You’re more on your own. If you get a flat tire, you better know how to change a tire. The Yellowstone Club is a wilderness experience with a high level of service. The two products don’t compete; they are very complementary,” he says.

For the Bough family, the amenities offered on-site the club made it a perfect fit. “I think the Yellowstone Club offers some really unique aspects that combine old Montana with new,” Bough says. “For me, it’s a really great combination of the best parts of the Montana I grew up with and the new possibilities of Montana in the future.”