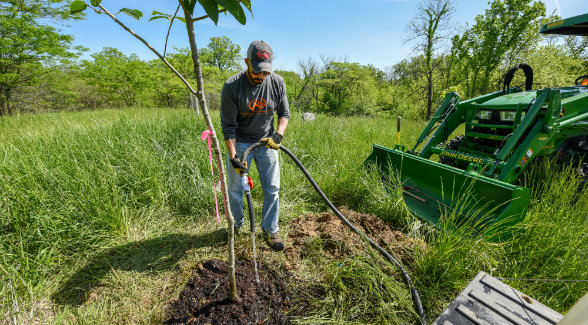 A TIME TO SOW | Whitetail Properties CEO Dan Perez, shown planting a sapling, believes that the market is ripe for his company to add an auction component to its business model.

Williams & Williams knows auctions. The Tulsa-based auction house boasts a century of experience. In the past decade alone, the company has sold more than $10 billion in real estate across the United States, Central America, and Europe.

Now these two companies are teaming up to form Ranch and Farm Auctions. The joint venture officially began last summer, but is poised to take off by the end of this year, according to Whitetail CEO and founding partner Dan Perez.

“With what we both bring to the table, we can change the scope of land real estate auctions as they exist today,” Perez says. “We have very strong expectations because combining the individual strengths of Whitetail Properties and Williams & Williams gives us a head start right out of the box.”

Greg Lutz agrees. A managing director at Williams & Williams who serves as CEO of Ranch and Farm Auctions, Lutz points out that the auction house can now utilize Whitetail’s 220 agents and staff to make connections with property owners beyond the retail, industrial, and other commercial categories that traditionally have been Williams & Williams’ specialty.

“The Whitetail agents are the boots on the ground when it comes to land real estate, while we have the auction expertise,” Lutz says. “So we thought the marriage of those two companies was perfect. You have two entities that are both experts in their field.”

Perez says Whitetail has been interested in venturing into the auction business for several years, since the most common way that farm and ranch land changes hands is through auctions. He says the company was receiving an increasing number of inquiries from landowners who wanted to sell their land via auction instead of by utilizing the more traditional brokerage route.

“We saw that need and wanted to get into that component of the business,” Perez says. “Williams & Williams is perfect because they have a huge compliance division and years of auction knowledge. They can go through these properties like popcorn, they sell them so fast.” 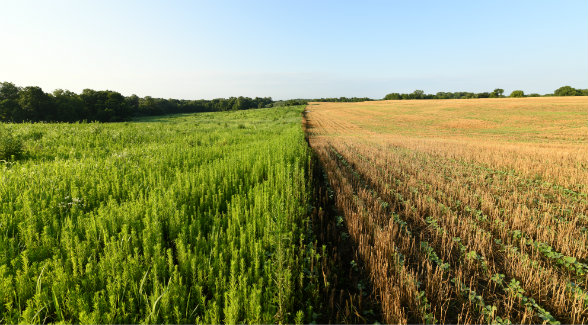 SOFT LAUNCH | Ranch and Farm Auctions has already completed a dozen sales since August 2018 without even marketing the brand.

Williams & Williams also was looking to expand its reach, and Lutz says land auctions were the logical next step, considering that there was no existing company offering that service on a national level.

“There are a lot of people who do a pretty good job with auctions locally, but nobody is doing it nationwide,” Lutz says. “We saw an opportunity and a market for that. So we started looking at potential partners, and Whitetail quickly came to the forefront. They are the premier land real estate company in the United States. They do it better than anybody else.”

“Things have already started out like gangbusters,” says Steve Stallard, a principal in Williams & Williams and a partner in Ranch and Farm Auctions. “Just through word of mouth we’re getting a substantial amount of interest. We’re very excited about the possibilities.”

Company officials are eager to fully integrate Whitetail’s network of land agents with Williams & Williams’s extensive database of qualified buyers and are optimistic that Ranch and Farm Auctions will quickly become a major player in the market.

“We’re getting a lot of traction right out of the gate without really trying too hard,” says Whitetail broker Joe Gizdic, who serves as president of Ranch and Farm Auctions. “Our goal is to have better national outreach than any local auction company. We’re going to be able to do it bigger, better, and faster than anybody else.”