By Jack Flemming A heated court battle, a last-second offer, and a sparsely attended auction behind a fountain in Pomona — this chapter of the famed Mountain of Beverly Hills ends not with a princely sum but a sale price… 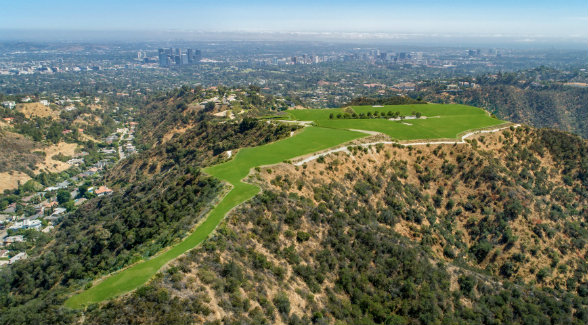 A heated court battle, a last-second offer, and a sparsely attended auction behind a fountain in Pomona — this chapter of the famed Mountain of Beverly Hills ends not with a princely sum but a sale price more like that of a sports car.

Touted as the city’s finest undeveloped piece of land, the 157-acre property redefined the luxury market when it listed for a record $1 billion last year. On August 20, it sold for a mere $100,000 at a foreclosure auction, a fraction of the $200-million loan outstanding on the property.

A markdown of 99.99 percent, of course, comes with some fine print. Any other buyer would have been on the hook to repay that loan — and this buyer has to eat that loss.

That’s because the buyer is the estate of late Herbalife founder Mark Hughes, which previously owned the property. The estate set this current saga into motion by selling it to Atlanta investor Chip Dickens in 2004.

Dickens borrowed around $45 million from the Hughes estate to buy the property, and that debt has since ballooned to roughly $200 million with interest and fees. Three years ago, Dickens transferred ownership to a limited liability company controlled by his partner on the project, Victor Franco Noval.

Noval is the son of convicted felon Victorino Noval, who pleaded guilty to mail fraud and tax evasion in 1997 and was sentenced to federal prison in 2003.

Unable to pay the debts, their limited liability company, Secured Capital Partners, tried — and failed — to declare Chapter 11 bankruptcy, which led the Hughes estate to force a foreclosure auction to either sell the property in hopes of recouping its losses or buy it back, likely losing the $200 million they were owed in the process.

They chose the latter.

A strange dichotomy emerged at the auction, which was informally held behind the fountain in Pomona’s Civic Center Plaza.

Of the roughly 20 people present, half were regular auction attendees dressing in casual clothes and toting lawn chairs and umbrellas. They were there for the usual slate of sales consisting of relatively cheap foreclosed homes around the area.

Behind them stood the suits, relaying messages in quick texts and hushed phone calls. Clad in pinstripes and tinted sunglasses, one woman identified herself as “no one.”

“Just stopped by on a walk,” she coyly added before convening with representatives of the Hughes estate.

The auction was over almost as soon as it began. The attorney overseeing the sale, David Bark of First American Title, asked if anyone was interested in being prequalified to bid. No one stepped forward, presumably because a buyer would be on the hook for the outstanding debt.

He then announced that the Hughes estate, which forced the auction, had placed a $100,000 credit bid on the property, which means the money comes from the debt they’re owed instead of cash.

No one protested, and a property once asking $1 billion unceremoniously sold for 1/10,000th of that price. That’s 0.01 percent.

The storied parcel went back to the Hughes family for the first time in 15 years. Hugs were exchanged. The woman in the pinstripe suit, who bore a striking resemblance to Hughes’ widow, Suzan Hughes, appeared to cry tears of joy.

As one story closes, another may open, however. Since the Hughes estate decided to buy back the property in a non-court-ordered foreclosure, it forfeits the $200 million owed by Secured Capital, according to the company’s attorney Ronald Richards.

After listing for $1 billion last summer, it languished on the market for half a year before the price was trimmed to $650 million in February.

The 35% chop followed an alleged back-and-forth negotiation in which developer Scott Gillen offered $400 million and Secured Capital countered with $600 million. The deal fizzled, but people familiar with the matter told The Los Angeles Times it was likely never serious to begin with.

Then on Wednesday, the day before the auction, Richards offered $150 million for the property on behalf of Secured Capital. The proposal was ignored, Richards said.

Richards had already done some legal gymnastics to delay the auction in the first place, which was originally set for Thursday, Aug. 15. Two days prior, Secured Capital strategically transferred ownership to Tower Park Properties, which is also controlled by Dickens and Noval.

According to Richards, Tower Park had an open bankruptcy plan and required three weeks’ notice of default before a foreclosure, which he said the lender never gave. He added that if the auction happened, the Hughes estate would be exposed to $400 million in punitive damages.

The auction happened five days later, and now Richards said he’s planning a wrongful foreclosure action and further litigation if the estate tries to evict Noval from the property — legally rather than physically, because the property doesn’t have any housing on it.

“This is the largest non-judicial foreclosure sale and the largest loss from a lender I’ve seen in 27 years,” Richards said. “My $150-million offer was legit, and now they have a catastrophic loss.”

In a luxury market that continues to break records, however, there’s likely massive interest for a one-of-a-kind property located at the highest point of the 90210. Celebrities, moguls, investors, and even royals have been tussling over the mountaintop parcel for nearly half a century — and for good reason.

Views stretch from downtown Los Angeles to Catalina Island, and the closest neighbor is half a mile away. Disneyland, at roughly 85 acres, measures merely half the size of the property.

The grounds are divided into 17 parcels. Six of them, ranging from 2.5 acres to 12.2 acres, are zoned for residential development.

Despite many dreams of development, the hilltop kingdom has always remained dormant.

The mountaintop was once owned by a sister of the late Shah of Iran, the Princess Shams Pahlavi, who had planned to build a lavish palace there. It didn’t happen.

It was later acquired by talk show host-turned-TV-producer Merv Griffin, who commissioned prominent designer Waldo Fernandez to create a marble-and-limestone mansion. It was never built.

After falling into financial trouble, Griffin sold the mountaintop for more than $8 million in 1997 to Mark Hughes, the founder of Herbalife, in a deal that reportedly set a price record at that time for Southern California.

After Hughes died in 2000 in his beachfront Malibu mansion at the age of 44, his estate sold the prized acreage to Dickens, who teamed with listing agent Aaron Kirman to try to sell the property last year.

Kirman told The Times he envisioned a single buyer, perhaps a royal family from the Middle East or a Chinese billionaire. Of the approximately 2,800 billionaires in the world, he said there are 100 that could and would want to buy the property.

If it sells for even $200 million, it’ll wallop the all-time price record for California. The current benchmark belongs to the Manor, which Formula One heiress Petra Ecclestone sold to a mystery buyer in July for $119.75 million.